The Words Between Us by Erin Bartels

The Words Between Us by Erin Bartels

A reclusive bookstore owner hoped she'd permanently buried her family's sensational past with a new name. But when the novels she once shared with an old crush begin appearing in the mail, it's clear her true identity is about to be revealed, threatening the new life she has painstakingly built.

This is such a special story and perhaps the title tells it all....the words between us can't express just how much I enjoyed it. Erin Bartels has been able to capture the feelings of Robin Windsor as both the young girl hiding from the shame of a father convicted of a horrible crime and as the young woman who has tried to create an adult life based on anonymity. Robin was just a young teen when her father's crime was discovered and she was sent to live with her grandmother, but she had to pretend that they were distantly related. Her fear of being discovered left Robin avoiding people and she found solace in her love of books and the power of words. She did experience friendship with Peter, a neighbor boy, and eventually confided in him but their friendship was shattered when she believed that he had told her secret. Now, the adult Robin continues to find comfort in books and her bookstore until she discovers that there was more to her father's crime and her mother's involvement. Seeking to unravel the mystery surrounding it and to discover who is sending her books through the mail, Robin is forced to rethink her past and her present.

The Words Between Us is told alternately as 'Then' and 'Now' and it is evident that Robin carries so much of her 'Then' into 'Now'; children often carry the stigma associated with the actions of their parents. Some readers may think this is a sad story but I found it to be uplifting because in the end, it is a testament to the power of love and the resilience of the human spirit.

I received a copy of this book from the publisher but I am voluntarily sharing this review. These are my own thoughts. 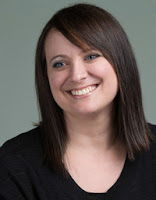 
Erin Bartels  is the author of We Hope for Better Things  and The Words Between Us, which was a finalist for the 2015 Rising Star Award from the Women’s Fiction Writers Association. She currently lives with her husband and son in Lansing, Michigan.


View all my reviews
Posted by Connie Porter Saunders at 1:52 PM