Perfectionistic librarian Jacqui Penn is ripped up by the roots when she’s dumped by her longtime boyfriend. Rootless and on the run, she is drawn two thousand miles west across Canada to the last place she ever thought could offer stability—the old homestead where her father grew up.
Renovating the derelict house soon becomes a personal battle as it stubbornly resists her efforts. While Jacqui struggles to renew the home, she spends time with the family Pops bitterly resented. Her hunger for roots grows stronger as she fights to discover the long-buried reasons her father fled the house as a beleaguered teen. But will she ever find the belonging she craves?

A woman, whose life has been colored by her father's perception of the family he left behind, finds herself going back to that family farm in Alberta, Canada. When her long-term relationship abruptly ends, she travels across Canada to begin again and it is there that Jacqui Penn finds a family and a personal relationship with God. Is it possible that she might also find a true and lasting romantic love? 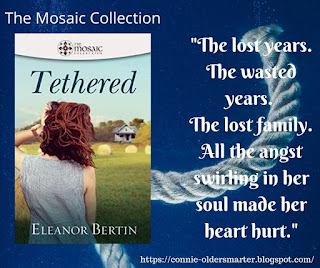 Eleanor Bertin has written a story about restoration in many forms. Jacqui sets out to restore the house that she inherited from her uncle and in the process, finds her relationship with her previously unknown family being restored. And it is there, in a new home and a new life, that she is released from her past and finally finds God. It is here that Jacqui Penn is truly restored!

If you are looking for a feel-good, light, and fluffy story, this may not be your answer. But if you want to read a realistic portrayal of a woman who has weathered many storms and ended up a much better person, you will certainly want to read Tethered! I recommend this book to all who enjoy contemporary Christian fiction.

I received a digital copy of this book from the author. I was never obligated to write a favorable review. These are my own thoughts. 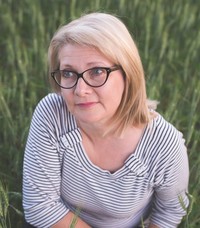 Prior to thirty years of raising and home-educating a family of seven children, Eleanor Bertin worked in agriculture journalism. She holds a college diploma in Communications and returned to writing with her first novel, Lifelines, followed by the memoir, Pall of Silence, about her late son, Paul. Unbound is her second novel.
Eleanor lives with her husband and youngest son amid the ongoing renovation of a century home in central Alberta where she reads, writes, sweeps up construction rubble and blogs about a sometimes-elusive contentment at jewelofcontentment.wordpress.com.


View all my reviews
Posted by Connie Porter Saunders at 2:36 PM