ABOUT THE BOOK
Former CIA sniper Kadance Tolle possesses a special set of skills and a rare pedigree. She comes from a family of assassins, and by saving Lyndon Vaile's life she risks being found by them. Despite the danger, Kadance feels compelled to help Lyndon discover who is after him--and his research that seems to prove that the Ebola virus was manmade and is about to be weaponized.With shadowy figures pursuing them and a Mastermind watching their every move, Kadance and Lyndon must scramble to stop an impending bioattack at the State of the Union address. But their warnings fall on deaf ears, and it becomes increasingly clear that there's no one they can trust--except perhaps each other.Strap in for a breakneck story that will have you up all night, hurtling toward the last page as the clock ticks and time runs out.
MY THOUGHTS.....
'Her eyes were deep, but not in a dramatic way---more like she'd seen terrible things no one should have seen, carried memories she longed to forget.'
What a story! A woman from a family of trained assassins, and a brilliant research scientist studying an Ebola virus, join forces to prevent the release of a deadly virus on an unsuspecting society. The action and suspense begin immediately, when Kadance Tolle saves Lyndon Vaile from an assassin's bullet, and the danger escalates, as they both become targets in this desperate race. Will they be able to find, and stop, the mastermind behind this malicious act?

'Even if she wanted to stay with him longer, have a real friendship, she couldn't do that to him. She was a hand grenade waiting to explode.'
An ex-CIA sniper certainly isn't the usual heroine of a Christian fiction novel, and Kadance  appears to be one tough cookie, until author Melissa Koslin teases us with suggestions of her goodness and kindness. A trained assassin, yes, but Kadance is totally devoted to Max, her Maine coon cat, and willing to risk her life to help a relative stranger. Will he return the favor by recognizing her need for redemption? Can Lyndon convince her that grace and forgiveness are available to all of us?

The plot of Never Miss could have been taken from current news reports, but Koslin states that it was written well before 2020!  It is an exciting novel, laden with danger and intrigue, and the unanswered questions continue until the very end. Readers who enjoy romance will appreciate the chemistry between Kadance and Lyndon, and there is also a light faith element. I recommend it to all who enjoy contemporary Christian suspense!

This book was provided courtesy of Revell. These are my own thoughts. 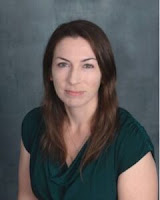 ABOUT THE AUTHOR
Melissa Koslin is a fourth-degree black belt in and certified instructor of Songahm Taekwondo. In her day job as a commercial property manager, she secretly notes personal quirks and funny situations, ready to tweak them into colorful additions for her books. She and Corey, her husband of twenty years, live in Jacksonville, Florida, where they do their best not to melt in the sun.
Learn more by visiting her   Website
Facebook     Twitter     Instagram
View all my reviews
Posted by Connie Porter Saunders at 12:05 PM