A Timeless, Beautiful Allegory of the Biblical Love Story of Ruth and Boaz The Great Rebellion of 1857 was a remarkably bloody business. At a time when Britain’s imperial influence in India was sparking brutal clashes on both sides, no one could have expected Rena, an Indian woman, to marry a British officer—nor do they understand her decision to follow her mother-in-law to England after her husband’s tragic death. Once the two widows are in Abbotsville, the stern yet compassionate Lord Barric attempts to help them despite his better judgment. Soon he is torn between the demands of reputation and his increasing desire to capture Rena’s heart for his own. 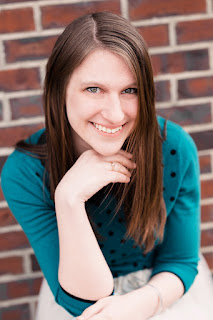 Naomi Stephens is a bookworm turned teacher turned writer. She received a M.A. in English from Indiana University-Purdue University Fort Wayne and now lives in Ohio with her husband, her two children, and a rascal of a dog named Sherlock.

A Timeless, Beautiful Allegory of the Biblical Love Story of Ruth and Boaz The Great Rebellion of 1857 was a remarkably bloody business. At a time when Britain’s imperial influence in India was sparking brutal clashes on both sides, no one could have expected Rena, an Indian woman, to marry a British officer—nor do they understand her decision to follow her mother-in-law to England after her husband’s tragic death. Once the two widows are in Abbotsville, the stern yet compassionate Lord Barric attempts to help them despite his better judgment. Soon he is torn between the demands of reputation and his increasing desire to capture Rena’s heart for his own. Which will he choose? Find out in Shadow Among Sheaves by Naomi Stephens.

Read an Exclusive Excerpt from Shadow Among Sheaves:


She smiled, stepping closer and placing her hand on the horse’s wet snout. Samson was a pretty beast with wide, ponderous eyes and a few splotches of gray around his nose. The soft puff of air Samson snorted into her palm brought a delighted smile to her lips, and she gasped as he bowed his neck to nuzzle his nose against her stomach. She felt her smile leap into a grin. It was a delightful change, to feel joy so deep it finally showed.
Barric circled around Samson to stand beside her, his hands never leaving the reins. “He’s fond of you,” he remarked as Samson dropped his snout against her hip.
“Unsurprising, I suppose. Though he could also be searching you for a carrot.”
Surprised to hear Lord Barric speak so teasingly, and pleased by the gentle light she found in his otherwise tired eyes, Rena laughed her faint agreement. “That will teach me to come empty-handed, won’t it?”
Their smiles both dropped as a young, lanky stable hand came rushing out to take Samson, and Barric relinquished his hold on the reins, nodding his silent thanks.
As soon as the stable boy had disappeared with Samson, Bar¬ric glanced back at Rena. “Are you going home?” he asked, nodding toward the dusty road looping down the hill to William’s house.
She stepped back, realizing she had dawdled longer than she’d first intended. “Yes,” she answered. “I often come this way to avoid the other workers.”
“Might I walk with you?” He turned to hang his whip on a peg. “Just a short stretch of the road?”
Stunned by his request, and a bit suspicious of his motive, she nonetheless nodded. “Yes, of course.”
Barric drew up beside her, his even strides betraying no unease, though he was silent for some time as they made their way down the golden-colored hill.
“You have seemed tired these past few days,” he observed. Rena did not bother to deny it. She’d been working hard to keep up with the others, as Barric had told her she must, and felt wearier for it. She had tried to split her days in half, the mornings spent binding sheaves with the women and the afternoons spent picking for her own stores, but the work was backbreaking, and, as he had already pointed out once before, she was not used to hard labor. “I realize I haven’t really asked you how you are settling in,” he went on.
“Perhaps you’ve been too busy provoking me,” she answered before she could stop herself.
Barric’s eyebrow inched up as he slanted an approving smirk down at her. “Perhaps.”
Rena cursed her honest tongue. She must have been more tired than she thought, to speak so freely to a man of title. “I have been well,” she tried again, a bit more diplomatically. “The house suits us, if that is what you are asking.”
“The people here do not speak to you unkindly?”
“The people do not speak to me at all.” She had meant to sound casual, unaffected, but heard the hurt in her own voice she hadn’t been able to weed out. As Barric’s expression tightened, she hastened to amend, “Except for you, my lord. Of course. And the Wilmots.”
“They are good people,” he agreed quietly. “And will you be coming with them to the festival this evening?”
She hesitated. According to Alice, harvest home was a yearly tra¬dition, a night of raucous drinking and dancing to celebrate the close of the harvest. All of Abbotsville would be there—landowners, stew-ards, even tenant farmers and common laborers. But Rena was none of those things, and she and Barric both knew it.
“Come,” Barric teased, “do not tell me you are afraid to go. I would never have thought it of you.”
“I am not afraid,” she insisted. “I just had not thought about it.”
At her defensive tone, he smiled—a true smile—one that pinched the corners of his eyes and pressed grooves along the outer edges of his mouth. “You ought to come,” he decided. “Everyone in Abbotsville is welcome, and many are the men who would feel lucky to dance with you.”
But, of course, Lord Barric knew this was not true. The men in his fields regarded her mostly with contempt and made no secret of it— they would not count themselves at all lucky to dance with her. Was Lord Barric trying to offer her words of comfort? Or was he trying to convey a message?
Did he want to dance with her?
This was hardly a safe question, and so she asked another. “Do you dance, Lord Barric?”
When he met her gaze, so direct, she was all the more glad she had not stammered in her reply. The man walked a dangerous line whenever he deigned to speak to her. Far too close, she’d think, and then stern enough to cool her blood with a word.
He surprised her with another smile, this one a faint twist at the corner of his lips. “Perhaps you would have to come to find out.”

The story of Ruth's love and devotion for her mother-in-law Naomi is one of my favorite stories in the Bible so I was thrilled to see this new book that is loosely based on The Book of Ruth.  Rena Hawley is a young widow from India who has lost her British husband and she has committed herself to supporting her widowed mother-in-law as they both try to rebuild their lives by creating a new home in Abbotsville, England, Nell Hawley's birthplace.

As I read Shadow Among Sheaves I was touched by Rena's efforts to provide for her mother-in-law and I shuddered at some of the situations that she was forced to endure. Rena's life of privilege that she enjoyed in India no longer existed and she was harshly judged because of her Indian heritage.  Rena was proud buts she was also realisic and she doubted that her mother-in-law  would survive the deplorable conditions they were now facing in Abbottsville.  Her determination to provide for Nell soon gained the attention of Lord Barric and, even though he worried that his reputation might suffer, he finally agreed to allow this beautiful Indian widow to pick up grain that had fallen on the ground as the wheat was being harvested. Lord Barric observed Rena as she diligently worked to gather food and, just as Boaz admired Ruth's devotion to Naomi, Rena managed to capture the heart of Lord Barric with her devotion to her own mother-in-law.

Shadow Among Sheaves isn't always a pretty story because it touches on poverty, extreme hunger, prejudice, and the often unforgiving nature of humans. Rena witnesses the goodness of some Christian believers but she also is the victim of many heartless people and she struggles with a society that allows such cruelty. As she listens to Parson Richardson's sermons she begins to question this God that he speaks of; this God that her mother-in-law and Lord Barric both worship.  After one Sunday service she ponders what she has heard. "God dwelled within her. Could that really be true? How could she ever know for certain that such a God really loved her?" (p. 250)  It is soon after this that Rena seeks answers from the parson and finally understands the peace that comes from knowing the one true God!

As I read this book I was prompted to refer back to The Book of Ruth and isn't that what biblical fiction should do? Send the reader back to the true source of the story? If so, then debut author Naomi Stephens has certainly accomplished her goal. Shadow Among Sheaves is a book that will appeal to fans of both historical and Christian fiction.

I received a complimentary copy of this book from Barbour Publishing and was under no obligation to post a review.
.

Godly Book Reviews, April 30
Mary Hake, April 30
Worthy2Read, April 30
Back Porch Reads, May 1
Inspirationally Ever After, May 1
Fiction Aficionado, May 2
Splashes of Joy, May 2
Christian Chick’s Thoughts, May 2
Bigreadersite, May 3
Inklings and notions , May 3
Blossoms and Blessings, May 3
Babbling Becky L’s Book Impressions, May 4
janicesbookreviews, May 4
Just the Write Escape, May 5
Stephanie’s Life of Determination, May 5
Truth and Grace Homeschool Academy, May 6
For Him and My Family, May 6
Kat’s Corner Books, May 7
Pause for Tales, May 7
Aryn The Libraryan, May 8
Faery Tales Are Real, May 8
Hallie Reads, May 8
Abba’s Prayer Warrior Princess, May 9
Library Lady’s Kid Lit, May 9
Locks, Hooks and Books, May 9
Through the Fire Blogs, May 10
The Becca Files, May 10
The Christian Fiction Girl, May 11
Older & Smarter?, May 11
Debbie’s Dusty Deliberations, May 11
Texas Book-aholic, May 12
Happily Managing a Household of Boys, May 12
A Reader’s Brain, May 13
For the Love of Literature, May 13 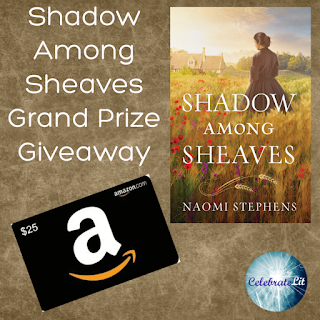 To celebrate her tour, Naomi is giving away a grand prize of a $25 Amazon gift card and a finished paperback copy of Shadow Among Sheaves!!
Be sure to comment on the blog stops for nine extra entries into the giveaway! Click the link below to enter. https://promosimple.com/ps/deb9/shadow-among-sheaves-celebration-tour-giveaway


Posted by Connie Porter Saunders at 9:39 AM