The Edge of Mercy by Heidi Chiavaroli

Two women, three hundred years apart, must face the devastation of all they hold dear...

Suspecting her husband is having an affair, Sarah Rodrigues fights to appear unbroken while attempting to salvage her family. Though distracted by her own troubles, Sarah is summoned to an elderly friend’s deathbed for an unusual request—find a long-lost daughter and relay a centuries-old family story.

Determined not to fail her friend, Sarah pieces together the story of her neighbor’s ancestor, Elizabeth Baker, a young colonist forced into an unwanted betrothal but drawn to a man forbidden by society.

While Sarah’s family teeters on the edge of collapse, her world is further shaken by the interest of a caring doctor and a terrible accident that threatens a life more precious than her own.

Inspired by the unconditional love she uncovers in Elizabeth’s story, Sarah strives to forgive those who’ve wounded her soul. But when light shines on the dark secrets of her neighbor’s past and the full extent of her husband’s sins, will looking to a power greater than herself rekindle lost hope?

The Edge of Mercy by Heidi Chiavaroli
My rating: 4 of 5 stars

The Edge of Mercy is a time-slip novel with the stories of Sarah and Matt Rodrigues set in our current time and Elizabeth Baker, Abram, and Caleb Tanner living in the late 1600s. The first nine chapters of this book relate to the contemporary setting and I had a hard time getting into Sarah's reactions to her husband telling her that he wants to live away from the house for the summer. Her reaction that it is a separation is met with his assertion that it is a break but Sarah, of course, is devastated and wonders if he might be having an affair. As she grapples with the feelings of hurt and betrayal she also becomes involved in granting the request of her dying neighbor to deliver a family journal that was written in the late 1600s to the neighbor's estranged daughter.

I admit to enjoying historical fiction and it is this story of an historical journal that really drew me in. It is 1675 and Elizabeth Baker is promised to one man but she feels an immense attraction to another. It is Elizabeth's story that grabbed my attention and I fell in love with this young woman who must deal with loving a man who is Native American and thus considered unacceptable. As Sarah reads Elizabeth's written thoughts she is compelled to compare their similarities. Yes, their lives were centuries apart but they both have been forced to deal with circumstances out of their control. This journal reveals Elizabeth's realization that her intense physical attraction for Abram overshadowed the deep and abiding love that Caleb offered her and she finally understands that Caleb's love demonstrated the ultimate sacrifice. Elizabeth's words tell of both her human loves and her deepening love for God. As Sarah continues to read she is prompted to examine her own life, her marriage and her personal faith. And finally, Sarah understands!

This is a book packed with emotional themes. The doubts and deep hurts that infidelity causes are explored but there is also the promise of forgiveness, redemption and being restored. I loved how the author has been able to weave these two stories, over three hundred years apart, into a memorable novel of love, hope and unconditional love. I especially enjoyed the historical details and the legend of Abram's rock being used in the plotline. I found The Edge of Mercy to be a compelling novel and I will be reading more of Heidi Chiavaroli!

I received a complimentary digital copy of this book but I am voluntarily sharing my thoughts in this review. 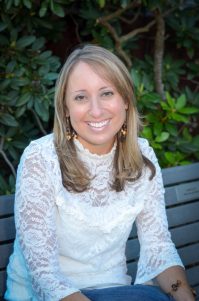 Heidi Chiavaroli began writing twelve years ago, just after Jesus had grabbed hold of her heart. She used her two small boys’ nap times to pursue what she thought at the time was a foolish dream. Despite a long road to publication, she hasn’t stopped writing since! Heidi won the 2018 ACFW Carol Award for Debut Novel and is a 2018 Christy Finalist. Both her debut novel, Freedom’s Ring, and her sophomore novel, The Hidden Side, are 4½-star Romantic Times Top Picks. Freedom’s Ring was also a Booklist Top Ten Romance Debut. Heidi loves exploring places that whisper of historical secrets, especially with her family. She loves running, hiking, baking, and dates with her high-school sweetheart and husband of fifteen years. Heidi makes her home in Massachusetts with her husband and two sons.
CONNECT WITH HEIDI: website | Facebook | Twitter | Pinterest | Instagram
View all my reviews
Posted by Connie Porter Saunders at 5:53 PM