Like Flames in the Night (Cities of Refuge, #4) by Connilyn Cossette

Strong-willed Tirzah wants to join her people in driving the enemy from the land of Israel and undergoes training for a secret mission inside the stronghold of Shechem. But soon after she has infiltrated the ruthless Aramean commander's kitchen, she makes a reckless decision that puts her and her allies in grave danger.

Fresh off the battlefield, Liyam returns home to discover his beloved daughter is dead. After his vow to hunt down her killer leads to months of fruitless pursuit, his last hope is in a family connection that comes with strings attached. Strings that force him to pose as a mercenary and rescue an infuriating woman who refuses to leave her mission uncompleted.

When an opportunity to pave a path to a Hebrew victory arises, can Tirzah convince Liyam to fight alongside her in the refuge city of her birth? Or will Liyam's thirst for vengeance outweigh his duty to his people, his God, and the woman he's come to love?

Like Flames in the Night is a fantastic way to wrap up a series that has made me a forever fan of author Connilyn Cossette. In the four books of the Cities of Refuge series she has created an amazing group of characters and the hero and heroine of this book are both wonderful additions. Tirzah is brave and she loves her country and her God; through all of her trials and efforts she continues to show great faith and determination as she becomes a spy and journeys to Shechem to uncover secrets while working in the kitchen of an Aramean commander. Along the way she joins forces with Liyam, a man intent on revenging the death of his beloved daughter. As they work to achieve their individual goals, their grudging admiration for each other turns into something much more. Cossette beautifully describes their increased awareness of each other romantically and she vividly conveys their fears as they realize that their mission could end in tragedy.

"As I headed down into the valley, I willed myself to focus on the mission before me, instead of the inexplicable pull I'd begun to feel for the man at my back."

"I could not lose her. Not like I had Havah. Not like Nadina. It was becoming clearer by the day that I would not survive if I did." 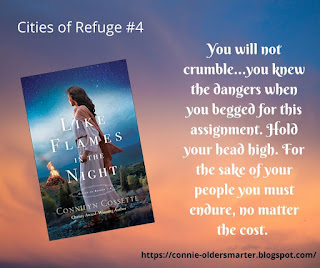 I have learned so much from reading this series and Cossette's extensive research is evident in these fictional stories that include Israel's history. God's chosen people rejected Him, and then, after repenting, they turned back to Him. Like a loving father, He forgave them and this book reminds us of the power of forgiveness. Liyam was able to forgive the man that he blamed for his daughter's death and he finally realized that God offers the gift of forgiveness to all who call on His name. Isn't it wonderful that all of us are beneficiaries of this grace?

Like Flames in the Night is an excellent way to conclude this series and I recommend it to all who enjoy biblical fiction.

I received a complimentary copy from the author. There was no obligation to post a favorable review and I am voluntarily sharing my honest opinion. 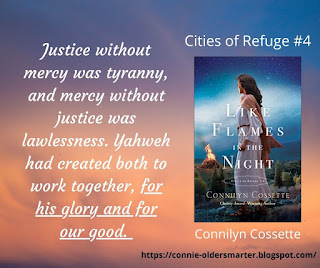 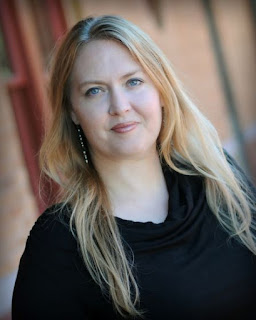 Connilyn Cossette is a Christy Award and Carol Award winning author whose books have been found on both ECPA and CBA bestseller lists. When she is not engulfed in the happy chaos of homeschooling two teenagers, devouring books whole, or avoiding housework, she can be found digging into the rich ancient world of the Bible to discover gems of grace that point to Jesus and weaving them into an immersive fiction experience. Although she and her husband have lived all over the country in their twenty-plus years of marriage, they currently call a little town south of Dallas, Texas their home. Connect with her at www.ConnilynCossette.com

View all my reviews
Posted by Connie Porter Saunders at 3:55 PM