The Blue Cloak by Shannon McNear

Based on real events beginning in 1797 — Rachel Taylor lives a rather mundane existence at the way station her family runs along the Wilderness Road in Tennessee. She attends her friend’s wedding only to watch it dissolve in horror as the groom, Wiley Harpe, and his cousin become murderers on the run, who drag their families along. Declaring a “war on all humanity,” the Harpes won’t be stopped, and Ben Langford is on their trail to see if his own cousin was one of their latest victims. How many will die before peace can return to the frontier?

This isn't the first book that I've read by this author but it is certainly one that I will long remember! The Blue Cloak is historical fiction and some may consider it hard to read but in the end, it is a story that proves God's providence in our lives. McNear has based her book on true facts that occurred in Tennessee and Kentucky during a two year span that began in 1797. Two men known as Big and Little Harpe began a reign of murder and terror and took with them three women who were victims themselves. These women were accused of these heinous crimes but were ultimately acquitted of any wrongdoing. Their punishment had certainly been in the treatment that they themselves endured.

This was a time when frontier settlements were miles apart and it took months to receive news and McNear clearly shows the fear and uncertainty along the Wilderness Road. The Harpes have been called some of America's first serial killers and she explains in her author's notes how she struggled with presenting these true facts in her fictional story. She admits that she considered giving the project up because of the truly evil deeds of these two men but she decided to show that "God is truly stronger than evil". As I read McNear's account, I found myself wanting to stop but unable to do so. Yes, there is violence but the author avoids offending readers and through it all, she is quick to remind us that there were Godly people praying for guidance and for God's protection as they feverishly worked to stop this evil. I also appreciated that she shows forgiveness as a central theme through it all.

The Blue Cloak is the latest book in The True Colors Crime series from Barbour Publishing and I am giving it 5 stars. It is beautifully written and McNear's attention to historical detail and her efforts to share God's presence in her story makes it a wonderful historical Christian novel. 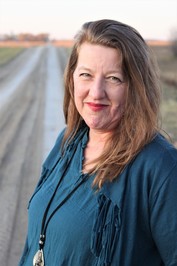 After more than two decades in the South, Shannon McNear now makes her home on the windy northern plains with her husband, four of their eight children, two German Shepherds, a bunny, three cats, several chickens, and a noisy flock of guinea fowl. She serves in worship and youth ministry, and has been writing novel-length fiction since age 15. Her first novella, Defending Truth, from A Pioneer Christmas Collection, was a 2014 RITA® nominee.
When not sewing, researching, or leaking story from her fingertips, she enjoys being outdoors, basking in the beauty of the Dakota prairies.

View all my reviews
Posted by Connie Porter Saunders at 5:24 PM