Burden of Proof by Davis Bunn

Burden of Proof by Davis Bunn

ABOUT THE BOOK
Three weeks after his twenty-third birthday, Ethan missed the chance to save his brother's life when he was murdered on the steps of the courthouse in Jacksonville, Florida. Ever since that fateful day, Ethan has sensed a deep disconnect between the man he should have been and the one he has become. His days play out a beat too slow, his mind replaying the scene of his failure again and again.

But when his brother's widow appears, asking for his help in uncovering what was really behind his brother's death, Ethan is stunned to hear that she and her late husband were involved in a much larger case than he knew--one that threatens the global power structure. As Ethan joins the search for answers, he will enter into his own past--and discover a means of redeeming his future.

Bestselling and award-winning author Davis Bunn invites you into a world of intrigue as a man held captive by his failure learns how to move forward with hope.
MY THOUGHTS.....
Ethan is dying from a rare condition caused by melanoma skin cancer invading the lining around his heart and lungs. Soon, he will face death and he will face it alone. And then, his sister-in-law visits with a niece he never knew about, and Ethan is offered a chance to relive and undo many of the mistakes he has made. Ethan can save his brother's life, reunite with the love of his life, and finally live a productive and unselfish life. As he begins a do-over, Ethan realizes that the way we treat others determines our eternity. I especially love this observation from Ethan's one-time surfing idol: "The answer, brother, is to aim for the eternal. Long as you do that, you're good to go. Even if you miss your target, even if you fall flat on your face, you know you've given it your best. You know. Because it's not for you."

Burden of Proof is a legal thriller that centers around a murder case that could have everlasting affects and a negative global impact but it is also an intense study of human nature. I absolutely loved this story of regrets, second-chances, and redemption. In the end, Ethan finally understands that he is a prodigal son, allowed to return home and welcomed with open arms!

Burden of Proof isn't overtly religious but it is certainly a clean and inspiring read. Author Davis Bunn reminds us that our life should be lived so that we don't face its end regretting what we did or didn't do. I was captivated by Bunn's creativity and I often found myself going back to re-read parts of his story again. This is a book that I gladly recommend!
I received a copy of this book from Revell. There was no obligation for a positive review. These are my honest opinions. 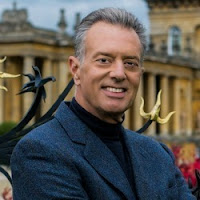 Davis Bunn is an internationally-acclaimed author who has sold more than seven million books in twenty languages.Honored with four Christy Awards for excellence in historical and suspense fiction, Davis was inducted into the Christy Hall of Fame in 2014.His bestsellers include The Great Divide, Winner Take All, The Meeting Place, The Book of Hours, and The Quilt. A sought-after lecturer in the art of writing, Bunn was serves as Writer in Residence at Regent's Park College, Oxford University.Davis Bunn also writes under the names Thomas Locke (for his epic fantasy and techno-thriller novels) and T. Davis Bunn (for books published prior to 2002).Learn more about Davis Bunn      Online     Facebook     Twitter     Pinterest
View all my reviews
Posted by Connie Porter Saunders at 4:21 PM