The Waltz of Devil's Creek by Justine Carver: Review & Giveaway with #HFVBTBlogTours

The Waltz of Devil's Creek by Justine Carver

Judith Campbell is dying, and she cannot take the painful truth about where her son came from to the grave with her. While on her deathbed in Atlanta, Georgia in 1994, Judith tells him the tragic story of his conception, and which of two men his birth father could be: the young man who professed his love to her, or the pastor who assaulted her.

Set in the Deep South in 1947, The Waltz of Devil's Creek digs into the dark crevices of racism and women's rights during a heated political climate in an era of segregation. Combined with Judith's lack of social stature, and at a time when reporting sexual assault was unheard of, every injustice is stacked against her from the very beginning.

But there is a light in Judith's young life: her best friend, Joseph Bird, who has loved her since childhood. Joseph stands up for Judith when no one else will and proves that even in the darkest of times, a light is always burning.


"The Waltz of Devil's Creek is a poignant and memorable tale that outshines the standard conventions of its genre." – The Booklife Prize

Judith Campbell's family certainly wasn't wealthy by the standards of society but she was rich in the things that mattered: she was loved by her parents and she grew up with a respect for all people. Taught to value everyone, Judith soon discovered that respect wasn't always returned and that discrimination existed on many levels. There was discrimination against the poor, discrimination against women, and certainly, race discrimination. Judith felt a deep empathy for her black friends and neighbors and realized that "No one with white skin, no matter how poor or how many black friends they had, would ever be treated as horribly as black folks in those days."
The Waltz of Devil's Creek isn't an easy book to read and it isn't one that I normally read because a few of the sections are much more explicit than what I prefer. It is, however, a book that I consider well written because it honestly deals with the unjust treatment of both black people and women during much of our nation's history. There is also a sweet love story that begins when Judy and Joseph Bird become friends as children and I loved watching their friendship blossom into so much more as Judy deals with a trauma that no young girl should face. Judy is an amazing character among a multitude of intriguing characters and I appreciate that author Justine Carver allowed her to remain strong, faithful, and always believing that, while life might not be fair,  God always has a plan.
The Waltz of Devil's Creek is a compelling story that I won't soon forget and fans of historical fiction will surely enjoy this book. Be aware, however, that violence, offensive language, and adult situations are part of this story.
I received a copy of this book from the author and Historical Fiction Virtual Book Tours. A favorable review wasn't required. These are my own thoughts.

I learned more from Joseph than I ever learned from my teacher, I thought, even though some of what he taught me were things he believed to be true but had no evidence to back it up. But Joseph was smart beyond his years and his generation, and so it was never easy to discredit him---his ideas sure did rub off on me, that was for sure.
And when he talked about the Bible, and how there was "no way it hasn't been altered by man over generations of time to suit those in power and and wanted to keep it", the conversations lasted hours, sometimes days, like he'd been waiting all his life to get these things off his chest.  I remained mixed on his ideas and accusations about religion, mostly because I feared God and of being led astray. But at night, when I'd lie in bed looking at those stars Joseph and I loved so much from my bedroom window, I couldn't help but wonder if everything he said was true.
Then I'd feel guilty for thinking it, roll over to face the wall, and think of other things until I finally drifted off to sleep.

Justine Carver was born and raised in the Southern United States on a heavy dose of creek-wading, lightning-bug-catching, and Saturday morning cartoons. She is a full-time writer, all-the-time reader, and every now and then, she pulls her head out of the clouds long enough to remember how much better it is up there.

Saturday, December 5
Review at Reading is My Remedy

Wednesday, December 9
Feature at Passages to the Past

The giveaway is open to the US only and ends on December 10th. You must be 18 or older to enter.

The Waltz of Devil's Creek 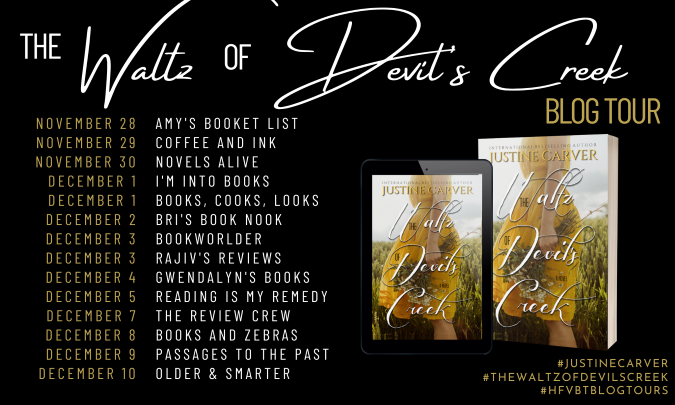