ABOUT THE BOOK
An unsolved case. A family secret.Getting to the truth could be deadly…Finding a mysterious file on her desk sends psychologist Kennedy Wells chasing down clues to solve a twenty-six-year-old kidnapping—and straight into a violent assault. When Texas Ranger Silas Boone comes to Kennedy’s rescue, he can’t help but wonder at her resemblance to the long-missing girl. With someone willing to kill to end the investigation, can they uncover the truth…and live to see Christmas?From Love Inspired Suspense: Courage. Danger. Faith.
MY THOUGHTS..... 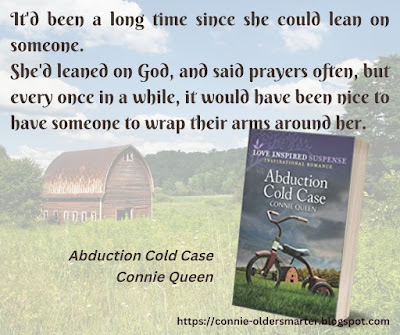 Kennedy Well's life is changed forever when she's given clues to the kidnapping of Harper Barclay, a three-year-old girl who disappeared twenty-six years ago. Imagine her shock when the cold case evidence suggests that she is that little girl who had been taken from a park so many years ago. Kennedy's parents had never mentioned adoption so how could this be?

Abduction Cold Case is a compelling story that kept me turning the pages until I learned the true story behind this kidnapping. Non-stop danger and clever clues make this a book that I couldn't put down, but Kennedy's realistic emotions make it especially poignant. Were her adoptive parents aware of this kidnapping? How can she separate the truth from lies? Who is determined to keep her from learning the truth?

I'm a fan of suspense novels and Connie Queen has become one of my favorite authors. This is a book you don't want to miss!

I received a copy of this book from the author. There was no obligation for a positive review. 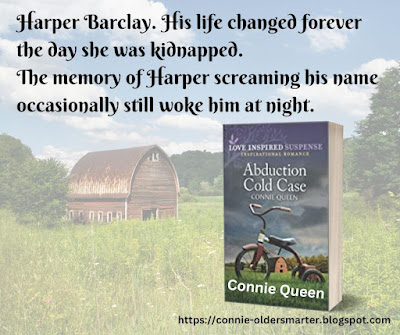 ABOUT THE AUTHOR
Connie Queen spent her life in Texas where she met and married her high-school sweetheart. Together they’ve raised eight children and are enjoying their grandchildren. As a child, Connie remembers her mom and sisters reading, but she preferred to be outside. It wasn't until later, she found the joy of being whisked away into another world. Today she resides in Nebraska with her husband, and Nash, her Great Dane, where she’s working on her next suspense.
Visit her Website or follow her on   Facebook     Twitter     Instagram
View all my reviews
Posted by Connie Porter Saunders at 8:00 AM