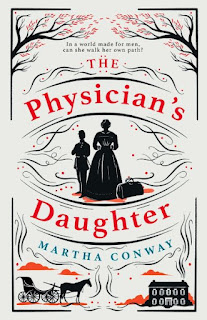 From the author of The Underground River comes this compelling new novel of female perseverance. Set in the aftermath of the Civil War, The Physician’s Daughter is the story of two people trying to make their way in a world that is struggling to escape its past.

It is 1865, the American Civil War has just ended, and 18-year old Vita Tenney is determined to pursue her lifelong dream of becoming a country doctor like her father. But when her father tells her she must get married instead, Vita explores every means of escape – and finds one in the person of war veteran Jacob Culhane.

Damaged by what he’s seen in battle and with all his family gone, Jacob is seeking investors for a fledgling business. Then he meets Vita – and together they hatch a plan that should satisfy both their desires. Months later, Vita seemingly has everything she ever wanted. But alone in a big city and haunted by the mistakes of her past, she wonders if the life she always thought she wanted was too good to be true. When love starts to compete with ambition, what will come out on top?

Praise
“In the proud tradition of female characters from Jo March to Meredith Grey, Vita Tenney takes her place as a determined woman unwilling to let society or her family control her destiny. I was captivated by The Physician’s Daughter. The novel stays with you.”
–Tony Phelan, executive producer of Grey’s Anatomy and Council of Dads
“Vividly realised, and impeccably researched, with a determined female lead”
–Kayte Nunn, author ofThe Botanist’s Daughter
“A riveting read set during the American civil war about a pioneering young woman dead-set on becoming a doctor.”
–Inga Vesper, author of The Long, Long Afternoon

MY THOUGHTS.....
Most fathers would be thrilled to hear that their child wants to follow in their footsteps but it's 1865 and Dr. Arthur Tenney refuses to give his eighteen-year-old daughter permission to go to medical school. He reminds her that it's time that she marry, have babies, and accept her station in life. Vita, however, is determined to become a doctor and she sets out to make her dreams a reality, with the help of war veteran Jacob Culhane. He's chasing his own dreams and together, they may be able to attain their goals by entering a marriage of convenience. Neither is prepared for the attraction that grows between them!

Author Martha Conway has created a wonderful heroine in this intriguing look at the prejudices that women have encountered in the past. I was also drawn to Jacob's battle with the mental trauma that resulted from his service during the Civil War. Both of these scenarios are reminders that some things never completely change. Women are still trying to break through glass ceilings and PTSD is a very real disease in our twenty-first century!

Fascinating characters, a historical setting, and Conway's extensive research of the medical practices of the 19th century make this a book that I couldn't put down. The Physician's Daughter is captivating historical fiction!

I received a complimentary copy from the author via Historical Fiction Virtual Book Tours. There was no obligation for a positive review.
My rating: 4 of 5 stars 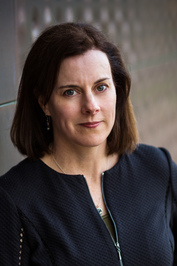 Martha Conway is the author of several novels including The Underground River, which was a New York Times Book Editor’s Choice (titled The Floating Theatre in the U.K. and Europe). Her novel Thieving Forest won the North American Book Award for Best Historical Fiction.
Martha’s short fiction has appeared in the Iowa Review, Mississippi Review, The Quarterly, Carolina Quarterly, and other publications. She has reviewed fiction for the San Francisco Chronicle and the Iowa Review, and is a recipient of a California Arts Council fellowship in Creative Writing. In addition to writing, Martha is an instructor of creative writing at Stanford University’s Continuing Studies Program. She received her BA from Vassar College in History and English, and her MA in Creative Writing from San Francisco State University. Born and raised in Ohio, she now lives in San Francisco with her family, where the fog reminds her of lake-effect cloud cover in Cleveland.

Friday, September 30
Review at Reading the Past

Tuesday, October 4
Review at Novels Alive
Excerpt at What Is That Book About

Monday, October 10
Review at Reading is My Remedy

Tuesday, October 11
Review at History from a Woman’s Perspective

Friday, October 14
Review at Coffee and Ink
Excerpt at A Darn Good Read
Review at Reading Is My SuperPower

View all my reviews
Posted by Connie Porter Saunders at 1:30 AM