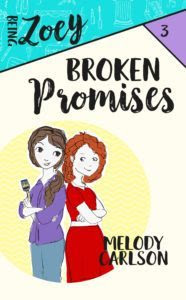 As she settles into life in the middle school of her new hometown, Zoey agrees to audition for the school play to encourage Louisa. Isn’t that what a BFF does? But she’s none too sure it’ll actually be fun—especially when she’s cast as a dog! Louisa really does need her support though when some of the older girls get upset at a sixth grader landing the lead role. Zoey does her best to be supportive and finally begins to feel really at home with her grandparents and at school.

Until someone pulls the plug on all her dreams.

Melody Carlson once again writes about sixth-grader Zoey and her best friend Louisa and even though I am much, much older, I thoroughly enoyed this book that targets readers in the middle grades. Louisa is very excited to try out for the school play and she wants Zoey to be in it also, and even though Zoey admits to possessing little talent and having no enthusiam, she does end up getting a part in the musical Annie. What follows is a realistic story about middle-school students and all of the drama that young people in this age group often experience: bullying, jealousy, and trying to fit in with other students. Zoey also has a lot of conflicting emotions to deal with: she felt that her mother dumped her at her grandparent's house but now she is beginning to enjoy small-town life and then...all of this might change if her mother comes to take her back to Seattle.

Broken Promises is a charming story that tugs at your heart as Zoey deals with living with her grandparents and trying to gain acceptance in a new school. Louisa and her Christian family are wonderful influences for this young girl who had never been exposed to God's Word until she came to Cedarville and the author is able to share a subtle faith message throughout the book. I also appreciate that Grams, Gramps, and Uncle Ned are so loving and supportive because, in today's society, many grandchildren now live with their grandparents.

This is the third book in the Being Zoey series and I am eager to see what the future holds for this young girl. I surely recommend it for young readers and I also believe that this would be a great book to read together and then discuss with your own daughter/granddaughter.

I received a complimentary copy of this book from the author but there was no obligation to write a positive review. These are my honest thoughts.

Melody Carlson has written more than 200 books for teens, women, and children. That’s a lot of books, but mostly she considers herself a “storyteller.” Her young adult novels appeal to teenage girls around the world. Her annual Christmas novellas become more popular each year. She’s won a number of awards (including RT’s Career Achievement Award, the Rita and the Gold Medallion) and some of her books have been optioned for film/TV. Carlson has two grown sons and makes her home in the Pacific Northwest with her husband and yellow Lab dog.

For many tweens, middle school is a jungle of insecurities, mean girls, and disappointments. As usual I gave Zoey plenty to deal with. Including a BFF with high expectations and an absentee mom who still hasn’t grown up. Even though some people let her down, Zoey keeps plugging along, even playing Sandy the dog in the school play. And through her struggles she changes and matures — kind of like real life. 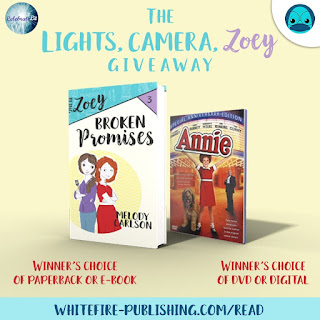 To celebrate her tour, Melody is giving away the grand prize package of a copy of Broken Promises and the classic Annie movie (DVD or digital download, winner’s choice)!!
Be sure to comment on the blog stops for nine extra entries into the giveaway! Click the link below to enter.

https://promosimple.com/ps/f4a1/broken-promises-celebration-tour-giveaway
Posted by Connie Porter Saunders at 8:52 AM