When elite members of the military are murdered on the streets of Washington, DC, FBI Special Agent Bailey Ryan and NCIS Special Agent Marco Agostini must work together to bring the perpetrator to justice. Unfortunately, all evidence points to a Navy SEAL sniper whom Bailey refuses to believe is guilty.

When Bailey and Marco start to connect the dots between the victims, including a link to a powerful defense contractor, they wonder if there's a deeper cover-up at play. Then Bailey is targeted, and it becomes clear that someone is willing to kill to keep their dark secrets.

With the stakes getting higher by the moment in a twisted conspiracy, there's a rush against the clock to determine whom they can really trust. As allies turn to enemies, the biggest secret yet to be uncovered could be the end of all of them. 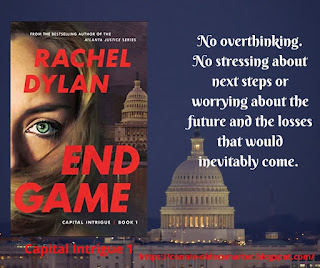 I loved the books in Rachel Dylan's Atlanta Justice series because they revealed her knowledge of the law and they also had a core group of characters that were featured in the three books of the series. Dylan now has a new series and this first book is a doozy! End Game is set in Washington, DC and it is filled with intrigue and an inside look at our US government. There are agents from the FBI, NCIS, and several other government agencies who become involved in the murders of several members of the military and the race begins to stop the deadly agenda of the killer (or killers)! Who is behind these murders and is government corruption involved?

FBI Special Agent Bailey Ryan and NCIS Special Agent Marco Agostini are the main focus in End Game but they are supported by several friends and it's obvious that future stories in the Capital Intrigue series will focus on some of these friends. This is one reason that I love Dylan's books...they allow us to build relationships with the characters as we continue to read the series. Second reason: Intrigue, action, and suspense. Just when I thought I knew who was behind these deadly acts, another clue would surface. Third reason: Dylan's books are always rich in faith and the act of prayer is always incorporated into the plot. Bailey has a deep faith in God and she talks to Him constantly and it is the Christian witness that she shares that helps to bolster Marco's own belief. And did I mention romance? Bailey and Marco's working relationship deepens into attraction and then into something more; their chemistry is intense but I can always count on Dylan to keep the romance exciting but unobjectionable.

I thoroughly enjoyed End Game and I am eager for the next book in the series. If you enjoy romantic suspense and Christian fiction, you definitely want to read this book. It's a keeper!

I received a complimentary copy from the author and publisher but there was no obligation for a positive review. These are my own thoughts and opinion.

Rachel Dylan is an award-winning and bestselling author of legal thrillers and romantic suspense. Rachel has practiced law for over a decade including being a litigator at one of the nation's top law firms. She enjoys weaving together legal and suspenseful stories. Rachel writes the Atlanta Justice Series which features strong, female attorneys in Atlanta. Deadly Proof, the first book in the Atlanta Justice series, is a CBA bestseller, an FHL Reader's Choice Award winner, a Daphne du Maurier Finalist, and a Holt Medallion Finalist. Rachel lives in Michigan with her husband and five furkids--two dogs and three cats. Rachel loves to connect with readers. You can find Rachel at her Website    Facebook     Twitter    Pinterest


View all my reviews
Posted by Connie Porter Saunders at 4:23 PM