The Runaway Heir by Janice Broyles

In Ancient Palestine, Michal, a young Israeli princess, marries the man she loves, but it comes with a high price. She must spy on him and report back to her father, the notorious King Saul. Michal hopes her father will forget his animosity toward the giant-killing David, and that she and David can finally live a life of peace together. Unfortunately, her father comes to collect on Michal's promise, and she is forced to choose between betraying her father or her husband. Her decision launches her life on a path she never expected. Michal and David are ripped apart for eight years. One is forced into a loveless second marriage, the other is forced to run for his life. If they can survive the vengeful King Saul, they may have a chance at restoring their love. But a lot can change in eight years, and Michal and David are not the same as they once were.


"Janice Broyles has done an exceptional job of bringing the Biblical persons of David and Michal to life through multiple layers of character and humanity. Alternating between each character's point of view, the reader is given a glimpse into their personal conflicts, fears, and victories which lifts them out of the pages of Scripture into the hearts and minds of the reader..." -Nan Jones, author of The Perils of a Pastor's Wife


David is such a fascinating person in the Bible. The young shepherd boy who believed that he could slay the giant Goliath, so he did. A young man who was able to calm King Saul with his beautiful music. The young soldier who became so popular with the people that King Saul feared that David would replace him in their affections. Now, as this story begins, it is 1019 BC and it is the wedding day of David and Michal, King Saul's youngest daughter. This is a marriage of love but it soon becomes apparent that their love and their marriage is doomed because of KIng Saul's deep hatred of his new son-in-law.

Author Janice Broyles has been able to create a fascinating re-telling of this biblical account that is related in 1 Samuel. David, at twenty-two, is forced to flee Palestine and leave his beloved wife; and even though they plan to reunite, obstacles constantly prevent this from happening. Broyles admits in her author's notes that even though she is true to the biblical account, it is from her imagination that many of the events in this book find life. And even though I have read many times how David was forced to run for his life, I was completely drawn in with the fictional details and David, Michal, and Saul's suspected thoughts. David longed for his wife, he feared for his life, and he wondered why God was allowing all of this to happen. Even when he had the chance to kill Saul, David believed that 'I am not God, and I will not take Saul's life into my hands. I will not do it. I will become King when the Lord determines it's time. And not one second before.' (p. 263)

The Runaway Heir is a story of love, hate, and fear; of deep faith, extreme loss, and the ability to forgive. It also reaffirms what we already know: that God sometimes allows circumstances to occur because of the future that He foresees.

This is intriguing biblical fiction and even though it is the second book in the David saga, it can be read as a standalone. I look forward to reading the next book, The Anointed Heir, that is due in 2020.

I received a copy of this book from the author and HFVBT Blog Tours but was under no obligation to write a positive review. These are my own thoughts. 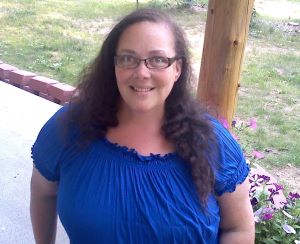 Janice Broyles is an award-winning author. She resides in Winston Salem, North Carolina, where she teaches at a local college. She spends the majority of her free time researching history and retelling fantastical stories. Luckily her husband and two sons understand her passion for history and making stories come alive. When not researching or writing, Janice Broyles enjoys spending time with her family and hanging out with her close circle of friends. The Runaway Heir is the second book to her David saga. The Secret Heir, released in 2018, is the first novel of the series. The Anointed Heir, the third book in the series, is set to be released by the end of 2020. Janice enjoys spending time with her husband of 23 years and their two sons and one dog.

Review at Jorie Loves a Story

During the Blog Tour, we are giving away a signed copy of The Runaway Heir! To enter, please use the Gleam form below.

– Giveaway ends at 11:59 pm EST on January 14th. You must be 18 or older to enter.
– Paperback giveaway is open to the US only.
– Only one entry per household.
– All giveaway entrants agree to be honest and not cheat the systems; any suspicion of fraud will be decided upon by blog/site owner and the sponsor, and entrants may be disqualified at our discretion.
– The winner has 48 hours to claim prize or a new winner is chosen. 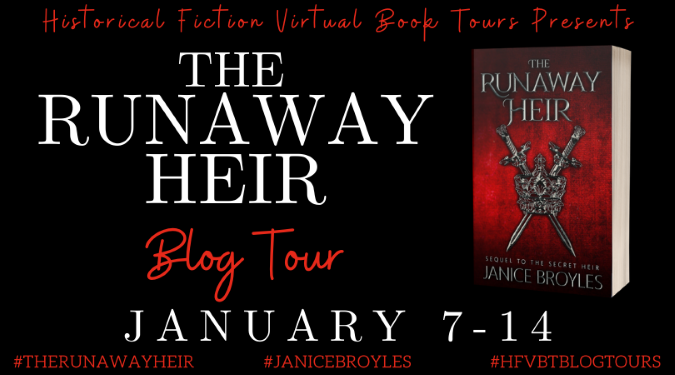 Posted by Connie Porter Saunders at 12:01 AM