Celebrity chef Maxwell Cavanaugh is known for many things: his multiple Michelin stars, his top-rated Culinary Channel show To the Max, and most of all his horrible temper. Hadley Beckett, host of the Culinary Channel's other top-rated show, At Home with Hadley, is beloved for her Southern charm and for making her viewers feel like family.
When Max experiences a very public temper tantrum, he's sent packing to get his life in order. When he returns, career in shambles, his only chance to get back on TV and in the public's good graces is to work alongside Hadley.
As these polar-opposite celeb chefs begin to peel away the layers of public persona and reputation, they will not only discover the key ingredients for getting along, but also learn the secret recipe for unexpected forgiveness . . . and maybe even love. In the meantime, hide the knives.
Fan-favorite Bethany Turner serves up a heaping helping of humor and romance with this thoroughly modern story centered on cooking, enemies, and second chances.

What would happen if the final two chefs competing for the title of America's Fiercest Chef actually liked each other? That would be much too easy and it wouldn't be nearly as entertaining and it certainly isn't the case for Hadley Beckett and Max Cavanaugh. Hadley is as nice and sweet as Max is bad-tempered and annoying and, unfortunately, she becomes the object of his temper tantrum caused by drinking too much. It is after he returns from rehab and they both are featured together on a cooking show that the real fun begins. Hadley Beckett's Next Dish is filled with witty conversation and amusing interaction between Hadley and Max, along with their very strong chemistry, as they begin working together on a cooking show titled Renowned.

Author Bethany Turner has written an entertaining romantic comedy centered around cooking and I especially enjoyed that she uses different cooking terms in the titles of the chapters, such as Steep for one month, Bring to boil over high heat, and Reduce to simmer. Max's character evolves from irritating to likable and it's obvious that a big part of his growth is due to being around Hadley. She is funny, hardworking, and very pretty, so is it any wonder that he begins to see her as more than a competent chef? The question is, will Hadley change her opinion of him?

If you are looking for a clean romance with a very subtle faith message of forgiveness and redemption, you will certainly want to read Hadley Beckett's Next Dish.

I received a complimentary copy from Revell but was not obligated to leave a favorable review. These are my own opinions. 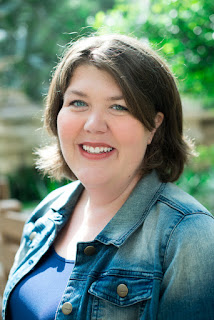 Bethany Turner is the award-winning author of The Secret Life of Sarah Hollenbeck and Wooing Cadie McCaffrey and the director of administration for Rock Springs Church in Southwest Colorado. A former bank executive and a three-time cancer survivor (all before she turned 35), Bethany knows that when God has plans for your life, it doesn't matter what anyone else has to say. Because of that, she's chosen to follow his call to write. She lives with her husband and their two sons in Colorado, where she writes for a new generation of readers who crave fiction that tackles the thorny issues of life with humor and insight.

View all my reviews
Posted by Connie Porter Saunders at 10:22 AM