A Portrait of Loyalty (The Codebreakers 3) by Roseanna M. White

ABOUT THE BOOK
Zivon Marin was one of Russia's top cryptographers, until the October Revolution tore apart his world. Forced to flee after speaking out against Lenin and separated from his brother along the way, he arrives in England driven by a growing anger and determined to offer his services to the Brits.

Lily Blackwell sees the world best through the lens of a camera--and possesses unsurpassed skill when it comes to retouching and recreating photographs. With her father's connections in propaganda, she's recruited to the intelligence division, even though her mother would disapprove.

After Captain Blackwell invites Zivon to dinner one evening, a friendship blooms between him and Lily. He sees patterns in what she deems chaos; she sees beauty in a world he thought destroyed. But both have secrets they're unwilling to share. When her photographs reveal that someone has been following Zivon, his loyalties are called into question--and his enemies are discovered to be far closer than he'd feared.

MY THOUGHTS.....
The Codebreakers is an outstanding series and this book is the perfect way to wrap it up! A Portrait of Loyalty has everything that I love in a book: a fictional story based on historical facts, two incredible characters who get their own chance to shine, lots of intrigue and suspense, and an extremely strong faith element. Lily Blackwell is a photographer and Zivon Marin is a cryptographer who begin as friends but working together in the war effort shows them that they share so much more and even when rumors about the Russian Zivon's character run rampant, Lily remains steadfast and faithful. Who wouldn't wish that they could find happiness...together? 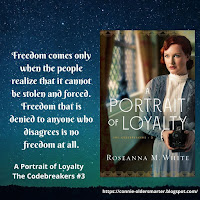 This story is set in London in 1918, during the time of World War I and the Spanish Flu, and author Roseanna M. White has given me a new appreciation of these historical occurrences. I've gained a whole new knowledge of the spies and the cryptographers who influenced the outcome of World War 1 and I've been reminded just how similar the Spanish Flu and the current Corona Virus pandemic really are! 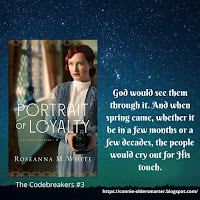 A Portrait of Loyalty is a remarkable story of trust, loyalty, and forgiveness during the worst of times and I recommend it to all who enjoy historical Christian romance.

I received a copy of this book from the author and publisher. A favorable review was not required and no monetary compensation was given. These are my own thoughts.
My rating: 5 of 5 stars

Roseanna M. White is a bestselling, Christy Award-nominated author who has long claimed that words are the air she breathes. When not writing fiction, she’s homeschooling her two kids, editing, designing book covers, and pretending her house will clean itself. Roseanna is the author of a slew of historical novels that span several continents and thousands of years. Spies and war and mayhem always seem to find their way into her books…to offset her real life, which is blessedly ordinary. You can learn more about her and her stories at her Website  Facebook  Twitter Instagram