The Sound of Falling Leaves by Lisa Cox Carter

ABOUT THE BOOK
After aspiring opera singer Tessa loses her voice in a fire, she needs both a place to heal and a way to keep music in her life. She retreats to her aunt's apple orchard in rural North Carolina to collect folk ballads. But amid the autumn splendor of this isolated Appalachian community, she uncovers an unnerving connection between a murder case and a long-ago disappearance. Tessa gets a glimpse into an almost-forgotten world, encounters a corrupt, small-town political dynasty, and finds superstition and prejudice at every turn.She's also drawn to Zeke, the handsome but enigmatic orchard caretaker, who shows her that mountain justice is neither impartial nor just. But battling a conspiracy of silence, Tessa isn't sure if she can trust him. Yet somewhere in the mists of the Blue Ridge Mountains, evil lurks, and a killer is determined to keep the past where it belongs--dead and buried.
MY THOUGHTS.....
This is my first Lisa Carter book but it certainly won't be my last! She quickly drew me in to her story of corruption, murder, and cover-ups, and the drama and suspense kept me invested until the very end. I felt totally at home in Buckthorn, North Carolina and part of this was due to the Appalachian dialect that Carter used. I've known the feeling of being "jittery as a June bug" or hanging on to something "like a dog with a bone" and I've even had "my hackles raised".

The Sound of Falling Leaves is a fascinating study of broken people. Some of them are victims, some are truly evil, but most of them are hiding secrets that are about to be revealed. Danger and intrigue are in abundance but there is also overwhelming love and redemption. Zeke and Tessa both deserve a chance at happiness but can they find it together? Will Zeke's efforts to solve the recent murder of his foster-sister Kaci point him to a disappearance that happened many years ago? Is it possible for Zeke and Tessa to place their full trust in God?

Appalachian superstitions play an important role but it is the strong faith element that increased my appreciation. When Zeke questions his family connections, Tessa's very wise Aunt Dicy reminds him that "In the end, the only blood that will matter is the blood of Christ...Not the blood that runs through our veins, but the blood that washes our heart."

I can't say enough good things about The Sound of Falling Leaves and I highly recommend it to all who enjoy Christian romantic suspense!

I received a copy of this book from Kregel Tours but there was no obligation for a positive review. These are my own thoughts.
My rating: 5 of 5 stars
ABOUT THE AUTHOR 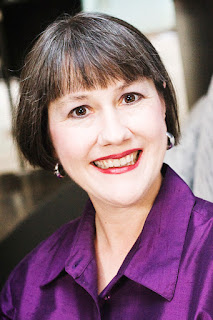 Lisa Carter is the bestselling author of seven romantic suspense novels, four historical novellas and a contemporary Coast Guard series. The Stronghold won the 2017 Daphne du Maurier. Under a Turquoise Sky won the 2015 Carol Award for Romantic Suspense. Beyond the Cherokee Trail was a 4 1/2 star Romantic Times Top Pick.As a Southern romantic suspense writer--Sweet Tea with a Slice of Murder--Lisa Carter has definite opinions on serious issues like barbeque, ACC basketball and the whole Pepsi vs. Coke controversy.She and her husband have two daughters and make their home in North Carolina. When she isn't writing, Lisa enjoys traveling to romantic locales. She also enjoys quilting and researching her next exotic adventure.