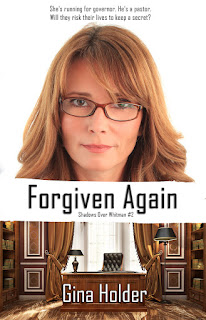 Will they risk their lives to keep a secret?

Annie Staten, now known as Kathleen Phillips, has dreamed of pursuing a political career and following in her father’s footsteps. But Richard was a hated man during his tenure as governor and now his enemies will stop at nothing to prevent his daughter from winning the election.

Ryan Whitestone has loved Annie since high school, but his heart is broken by the woman she has become. When the daughter she gave up for adoption comes back into her life, can he help her heal from her pain and remind her of who she used to be?

Will Kathleen be able to forgive herself, put the past behind her, and find love again?

The continuing story of No Greater Love.

"I'll do whatever it takes to win this race. And I dare anyone to stand in my way. Even you. Get out."

Does this sound like a determined man who is involved with a political machine? Can you believe that these words are spoken by an equally determined woman wanting to be the next Governor? As I began this book I found it hard to like the strong-willed Kathleen Phillips and very easy to admire Pastor Ryan Whitestone and his efforts to help this woman that he had loved twenty-five years earlier.

Author Gina Holder weaves a compelling story about this woman who seems determined to win, no matter the cost, and it isn't always an easy story to read. A baby taken away and a father denied knowing that this child existed are just part of this book filled with lies, corruption, betrayal, and a long lost love. As these hidden secrets and motives are slowly revealed in Forgiven Again, I was finally able to understand, and even sympathize, with all that Kathleen Staten Phillips has endured. Holder beautifully chronicles the path that Kathleen finally travels as she seeks to forgive others, and especially, herself!

"You can sit there, shaking your fist at God all you want, but He's still waiting with open arms to welcome you home."

Forgiven Again is a heartwarming story of forgiveness, redemption, and finding your true purpose in life. There is also a sweet second-chance at love and I recommend it to all who enjoy Christian romantic suspense.

I voluntarily accepted a copy of this book from the author and Celebrate Lit. There was no obligation for a positive review. These are my own thoughts. 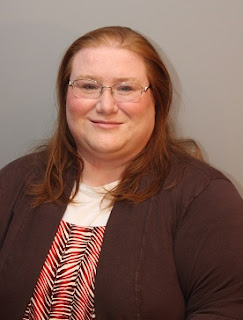 Gina Holder dreamed of being a writer from her early teen years. She lives in Colorado with her husband and daughter. When she’s not homeschooling or working on her next novel, she enjoys reading, watching movies, cooking, singing, and playing the piano. Her indie published debut novel was released in 2017.

The rag was warm and wet in her hand as Kylie wiped down the café countertop. Her shoes pinched her feet, and she was looking forward to kicking them off and plopping down on the couch with a movie and a leftover cinnamon roll.

As Kylie stretched across the flat surface, her hair fell into her face. She dropped onto her heels, then brushed the strand of hair out of her eyes. She turned to shake the cloth over the trashcan when the doorbell jingled behind her. Had she forgotten to switch off the open sign?

“I’m sorry. We’re closed,” she called over her shoulder. But instead of hearing the bell again, coins clunked down on her clean counter. She turned to face the late customer and cleared her throat. “Maybe you didn’t hear me. I said, we’re closed.”

The man about her own age nodded. His blond hair was knotted in dreadlocks and looked like it hadn’t been washed in months. His skin was tanned, and his clothes were well-worn. “I heard you. I just could really use a bottle of water.” His voice crackled, raspy and dry.

Compassion smote Kylie’s heart. It wouldn’t hurt to sell this guy one bottle of water before she sent him on his way. She turned to the fridge and opened the sticky door. The rush of cold air sent chills up her arms. “You look like you’ve been on the road awhile. Just passing through or hoping to stick around?”

“Hoping to stay awhile. I’m actually looking for someone.”

Kylie grabbed a cold water, then sat it on the counter. “That’ll be a dollar twenty-five.”

The man slid the coins toward her. Kylie took five quarters and dropped them into the cash register drawer. “Who are you looking for? Maybe I know them. This is a pretty small town.”

He twisted off the lid and poured the water down his throat. His Adam’s apple bobbed as he drank. When the bottle was empty, he sighed and wiped his arm across his lips. “Thank you. I appreciate you staying open for me.”

“Can I get you anything else?”

Did he turn down her offer because he truly didn’t want anything else or he just couldn’t afford anything else? She glanced over at the boxed cinnamon roll waiting for her to take home. She grabbed it and slid in across the counter. “Hey. This was left over from this morning. I was just going to toss it out. You’re welcome to it.”

The young man’s eyes widened. His stomach audibly growled. His neck reddened. “Thank you. That is truly kind of you.” He stretched out his hand. “Christopher.”

Kylie smiled and took his hand. “Kylie. Nice to meet you.”

An odd look passed over the stranger’s face. “Kylie? I’m looking for a Kylie.”

She raised an eyebrow. “Really? I’m the only one in town that I know of.”

“My name is Christopher Phillips. I’m your brother.”

Because I said so — and other adventures in Parenting, December 6

A Good Book and Cup of Tea, December 10

For Him and My Family, December 11 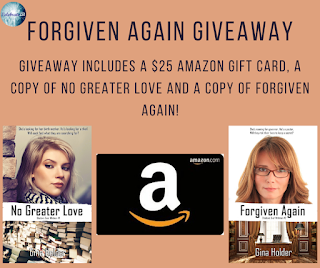 To celebrate her tour, Gina is giving away the grand prize package of a $25 Amazon Gift card and a copy of Books 1 and 2 of the Shadows Over Whitman series, No Greater Love and Forgiven Again!!