For any little boy or girl who hears the Train Man speak,
Who feels his rancid breath caress their pretty cheek,
Must close their eyes, pretend to sleep, and very softly pray,
Or else the evil Train Man may carry them away.

Finally free of her troubled upbringing, Alex Donovan is able to live out her childhood dream of working for the FBI. But soon after she becomes a member of the FBI's elite Behavioral Analysis Unit, authorities in Missouri contact them about bodies found on freight trains--all killed in the same way.

Alex never expected to be forced to confront her past in this new job, but she immediately recognizes the graffiti messages the killer is leaving on the train cars. When the BAU sends her to gather information about the messages from her aunt in Wichita, Kansas, Alex is haunted by the struggles she thought she'd left behind forever.

In a race against time to solve the case and recover a deadly virus sample the killer intends to spread, Alex must face how far she'll go--and what she's willing to risk--to put a stop to the Train Man.
Amazon | Barnes & Noble | ChristianBook.com
MY THOUGHTS.....
I became a fan of Nancy Mehl after reading her Kaely Quinn Profiler series and this new book has certainly boosted my admiration for her writing skills. . Night Fall is a thrilling, pulse-altering story that features a deranged person who believes that he is destined to fulfill a prophecy, and a chilling look at the difference between true religion and cults. It also spotlights the psychological scars that victims of abuse can carry all of their lives.  I found myself wondering if the Train Man would be stopped before he could murder another innocent victim and complete his mission of releasing an airborne virus that would devastate society. The Covid-19 pandemic is mentioned in Mehl's plot but, apparently, it can't hold a candle to this deadly virus! What follows is a mad rush to find the Train Man and end his madness. Is FBI agent and behavioral analyst Alex Donovan the only person who can unravel the clues in time to prevent this tragedy? 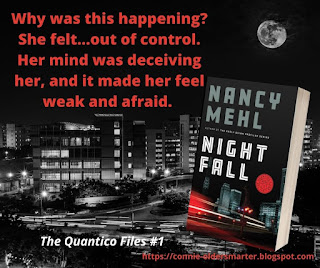 From the very beginning, the fascinating characters and gripping plot captured my attention and they wouldn't let go. There are also many thought-provoking references to God and His Word, as opposed to the Circle and The Book. The cult that is a big part of this story is named the Circle and its members consider The Book to be their ultimate source of truth. Alex was subjected to The Book as a young person and it has affected her deeply. Will her determination to escape the traumas of her past prevent Alex from finding the peace that only comes through knowing the one true God? 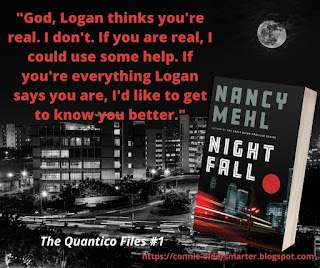 This is the first book in The Quantico Files series and I'm anxious to see what's waiting in the books that follow. Night Fall is a psychological drama filled with danger, adventure, and surprising twists, along with a very strong faith message. I recommend it to all who enjoy Christian suspense novels.

I received a complimentary copy of this book from the publisher. There was no obligation for a favorable review and I am voluntarily sharing my thoughts. 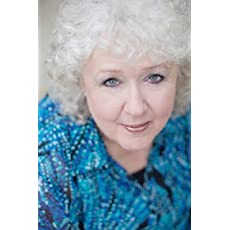 Nancy Mehl lives in Wichita, Kansas with her husband, Norman, and her very active puggle, Watson. First published in 2001, she has now authored nine books, including an omnibus mystery collection, Cozy in Kansas, which contains three of her previously published Ivy Towers mysteries. Book three in the series, For Whom the Wedding Bell Tolls, won the American Christian Fiction Writers Mystery Book of the Year award. Nancy's main writing interests lie in mystery although her new Harmony Series leans more toward the romantic suspense genre. Nancy runs a HUD program for the city of Wichita and is president of a volunteer organization, Wichita Homebound Outreach. She is a member of American Christian Fiction Writers and Kansas Authors Club.
Learn more about Nancy at her      Website     Facebook     Twitter
View all my reviews
Posted by Connie Porter Saunders at 11:41 PM