All her life, Etta Wozniak has toiled on her family’s small farm, located on the outskirts of a lake resort town. After losing her mother and siblings to one misfortune or another, life has fallen into a rut of drudgery and predictability. That is, until the day she discovers something in an unlikely place; an old car. Energized by the prospects of a world beyond the one she knows, she decides to make this her last summer on the farm. However, disaster is not through with Etta yet, and there will be consequences for her upcoming departure.

Art Adams, a recent college man, arrives in town for a family reunion. After years of moving from one city to another and avoiding conflict whenever it tries to find him, he becomes enamored with the lake. However, there is another reason for Art’s visit. He is to marry a woman he has never met before; an arrangement that was made on his behalf and without his knowledge. More comfortable around numbers and machines than people, Art is reluctant to confront his parents on the matter. But if he decides to do nothing, he risks losing who and what he has come to love.

In a small town of farmers and firemen, musicians and moonshiners, bossy parents and barn parties, two people will come to understand what they must give up in order to have the chance to build something new.

What Will He Do When I’m Gone?

In the first piece of good news, the stove was hot by the time she returned inside. Coffee was one of the few luxuries that even Papa would not do without. In the past month, Etta had skipped more than a handful of meals, but not one cup of coffee. The noise from grinding the beans was loud in the dark, but Papa never complained.

Fishing a chipped mug out of the cabinet, she was careful not to make too much noise. The door had worked itself loose sometime over the past year, and the motion of opening it produced all manner of bumps and squeaks as it shifted in place. It was just one of many things around the farm that suffered from neglect.

The table wobbled and moved as she leaned on it. With quick hands she managed to save the steaming contents of the mug before they sloshed out. One of the rare times she would be sitting today, Etta spared a few minutes to savor the piping hot cup. A splash of milk would have been nice, but none had been delivered this morning. It came as little surprise. At least the drink was hot, and banished some of the worse mental cobwebs.

A creak and thump called her attention to the ceiling. A moment later, Papa descended the stairs.

“Dzien dobry,” he said through a yawn while rubbing his eyes. Jakob Wozniak tended to revert to Polish when half-awake or in times of stress. Both Etta's parents had come from a village outside of Warsaw before she was born. While her mother, Lena, was fluent in English prior to immigrating, Jakob was a slower learner. For years, the family spoke a mixture of English and Polish in the house. When Etta was still a child, she remembered it being a huge source of pride when Papa finally went a full week without leaning on his native tongue.

“And good morning to you,” Etta returned in English. She placed a gentle emphasis on “good” and “morning”, so as not to embarrass him.

She waited until Papa had poured his own cup of coffee before she said, “The water pump is leaking.” It was often the case and worse in the spring. For every one part of water that made it to the bucket, two parts typically splashed the ground at her feet. Even so, it was worse than in years past. Her wet foot could attest to that.

Jakob grunted in response. While Etta had come to embrace the early morning hours, like her mother once had, Papa and the rest of the family only accepted them grudgingly. As such, she knew that she would get little from him for the next few minutes. Still, she pressed on. “Also, there was no milk delivery today.”

“I know,” he replied, to her surprise. “The tax bill is due this month, and I had to stop the milk delivery again.” Sneaking a quick sip from his coffee, he moved the coat that had been haphazardly draped over his chair. He might have simply chosen a different seat, but old habits are hard to break. Besides, the others were taken, despite being empty.

Jakob continued, “Also, try to leave the lights off if you don't need them.” Only after he said it did he notice that the electric lights were, in fact, already off. Regarding the kerosene lamp hanging from the ceiling, he nodded with approval.

Etta frowned. “How long must we go without milk this time? Or bread for that matter?” Some heat edged into her voice.

Papa peered over the top of his cup. His half-lidded eyes grew more alert at her tone and intent expression. He smiled weakly and raised a placating hand.

“We will have bread, of course. We can get milk again in a few weeks.” He sighed. “You know, it never used to be like this. Then, one day, a man comes to the door and asks for money. 'What for?' I say. 'For your civic duties,' he says.” Papa shook his head. “The Russians made levies as well, in the old country.”

Etta made no response, having heard this all before. Jakob fell quiet.

“Are you going to lose the house, Papa?”

Etta bit her lip. That had been a mistake.

“No,” he said quickly and with assurance. He looked around the room bathed in the golden light from the lamp. “This is a good house. I will make sure that we keep it.”

This is an empty house, thought Etta. Full of ghosts and memories. She said nothing, but breathed a quiet sigh of relief. Her slip had gone unnoticed.

They finished their coffee in silence, as they usually did. Mama had always been the talkative one. Etta and her father had something of a complicated relationship. Instead of pulling them together, their mutual losses only caused the both of them to withdraw.

Every so often, one or the other would attempt a foray into conversation, but by and large, they hardly spoke. That is, about anything besides the farm and what work needed to be done. Even so, he was her father, and she could not shake the feeling of guilt that came with the knowledge that she would soon leave him.

What will he do when I'm gone?

Jalopy is set in 1928, as the Depression era is about to begin, and even though the setting of this book is New Jersey, it could easily have been my home state of Kentucky. I've heard my grandparents speak about the hard times during this period in our nation's history, and I imagine that there were times when they wished they were someplace other than the farm they lived on. Author Wes Verde paints a vivid portrait of two very different people, who aren't satisfied with the lives that they're living. Etta is a young woman who can't wait to leave her home and the life that she's come to resent, as she and her father struggle daily to save the family farm. She feels trapped, and her only comfort comes from slipping away to sit in an abandoned car, to dream of what it would be like to live in a big city. Etta's chance meeting with Art and their eventual friendship offers her a glimpse of what could be, and Art finds the elusive peace he's been searching for. Will they both realize that New Jersey is exactly where they need to be?

Etta and Art are well-defined and likeable characters, but I was especially drawn to Etta. Back-breaking work and bouts of hunger may be her fate, but she doesn't give up her dreams of New York City, where music is ever present! I enjoyed seeing her friendship blossom with Art, and I could only hope that a deeper relationship might occur. Verde has a special way with words, and I recommend this intriguing story to all who enjoy historical fiction.

I received a copy of this book from the publisher via Historical Fiction Virtual Book Tours. There was no obligation for a positive review. These are my own thoughts. 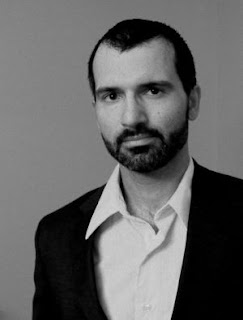 Wes Verde is an engineer by trade, a busybody by habit, and a lifelong Jersey boy.

Writing has been a hobby in one form or another since 2006 when he started drawing 3-panel comics. When he is not putting words down, he is picking them up; the "to-read" pile only seems to grow larger.

A fan of nature, he spends as much time outside as possible.

Tuesday, September 21
Review at Reading is My Remedy

Wednesday, September 29
Feature at I'm All About Books

Enter to win a paperback copy of Jalop by Wes Verde!

The giveaway is open internationally and ends on October 2nd. You must be 18 or older to enter. 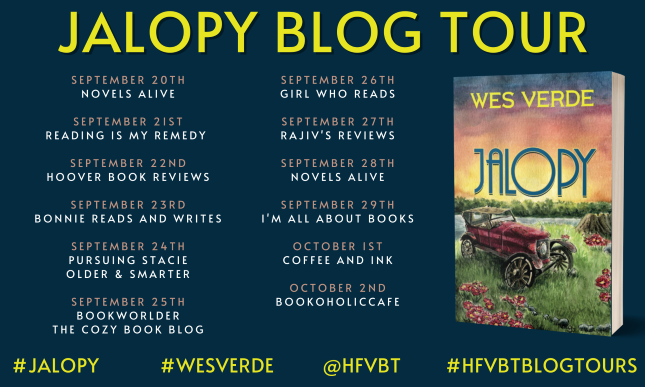 View all my reviews
Posted by Connie Porter Saunders at 10:30 AM