ABOUT THE BOOK
The drama of the Old Testament comes to life as one of the Bible's most infamous women longs for Joseph, her husband's servant, in this riveting novel from the award-winning author of Isaiah's Legacy.Before she is Potiphar's wife, Zuleika is a king's daughter on the isle of Crete, where the sisterhood of women rules in the absence of their seafaring husbands. Now that she's come of age, Zuleika knows she will soon be betrothed. Her father believes his robust trade with Egypt will ensure Pharaoh's obligation to marry his daughter.But Pharaoh refuses and gives her instead to Potiphar, the captain of his bodyguards--a crusty bachelor twice her age, who would rather have a new horse than a Minoan wife.Abandoned by her father, rejected by Pharaoh, and humiliated by Potiphar's indifference, Zuleika years for affection. But when her obsession with Joseph, the Hebrew chamberlain with the face and body of the gods, goes terribly wrong, she discovers the truth: Only the God of Joseph can heal her wounded heart.
MY THOUGHTS..... 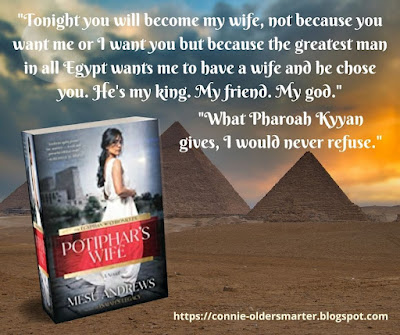 Joseph is a beloved character in the Bible, and I've long known that the lies of one woman caused many of the tragic circumstances in his life. The Holy Bible refers to this woman as Potiphar's wife, but now, she has a name! Zuleika is the name that author Mesu Andrews gives her, and this book has given me a new perspective of this deceitful woman.

Andrews is an acclaimed author of biblical fiction, and Potiphar's Wife is certainly another triumph for her. The combination of historical details and the author's imagination suggests an explanation for Zuleika's actions, and I was actually led to feel sympathy for this woman who was forced into a loveless marriage and betrayed by those around her. I was intrigued by the interaction between Potiphar and Joseph, the romance between Joseph and Zuleika's servant, Ahira, and Joseph's continuous rebuttal of Zully's advances. As I continued to read, I was reminded of several things. Zully's need for love and acceptance is universal, our lives are often determined by outside influences, but there is One who will never forsake us. Temptation is always present but acting on those temptations is our personal choice!

It's evident that Andrews devoted much time to research, and her storytelling kept me turning the pages to see if love and redemption were possible for this troubled, tragic woman. Potiphar's Wife is a must-read for all who enjoy biblical history!

I received a copy of this book from the author and publisher. There was absolutely no obligation for a favorable review. These are my unbiased thoughts. 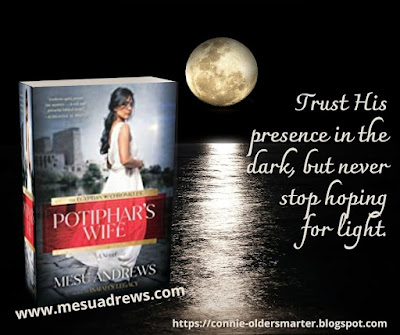 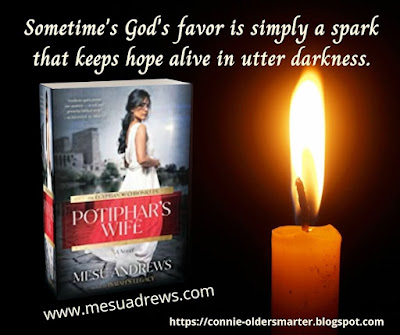 ABOUT THE AUTHOR
MESU ANDREWS is the Christy Award-winning author of Isaiah’s Daughter whose deep understanding of and love for God’s Word brings the biblical world alive for readers. Andrews lives in North Carolina with her husband Roy. She stays connected with readers through newsie emails, fun blog posts, and frequent short stories.
For more information, visit her Website      Facebook     Twitter    Instagram
View all my reviews
Posted by Connie Porter Saunders at 11:52 AM