ABOUT THE AUTHOR
Twenty years after the disappearance of the treasurer of Stonecroft Resort, an article appears in the Ontario Times, “Whatever Happened to Harold Ramsey?” reigniting Sackets Harbor with whispers, rumors, and gossip.The townsfolk believe Ramsey embezzled funds and left town with Kate Darby. Blair Ramsey believes her husband is dead. Miss Ada Whittaker believes Felix Zohlar knows more than he’s telling, and Felix Zohlar believes wealth and influence, like blood applied to Hebrew doorposts, will cause the hand of justice to pass over. Sheriff  Meriday believes Ada Whittaker should leave the investigation to him.

MY THOUGHTS.....
I've just discovered a new-to-me author with a new mystery series, and I couldn't be happier. Scandal at Stonecroft is the first book in the Sackets Harbor Mysteries series and I look forward to reading more adventures of Ada Whittaker, her secretary Gwen, and the other residents of Sackets Harbor. Author Sandra Kay Vosburgh has created a cast of characters who could be found in any small town, but a scandal that occurred twenty years ago threatens their peaceful existence. Will a letter written to Ada, who is also known as advice columnist Adrienne, offer the clues needed to solve the mystery? Will a twenty-year-old crime finally be solved?

Ada Whittaker is a unique character. I admired her commonsense approach to approaching the clues and developments in this case and I enjoyed her humorous interaction with her quirky secretary Gwen. I'm not sure how many of the supporting characters in this story will be present in the upcoming book that is scheduled for release in June 2022, but I'm eager to find out. If you enjoy likable characters, a plot with twists and turns to keep you guessing, and a strong faith element woven into an intriguing story, look no further. Scandal at Stonecroft is a delightful cozy mystery that you don't want to miss!

I voluntarily accepted a digital copy of this book from the author. There was no obligation for a positive review. These are my own thoughts. 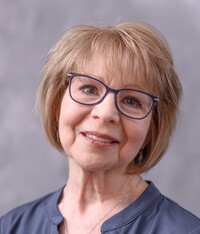 Sandra Kay Voburgh's journey to write for publication began at Montrose Christian Writers Conference. She went on to publish several articles, short stories, and dozens of devotionals. The influence of Agatha Christie novels led her to find her voice in the cozy mystery genre.

Growing up on a dairy farm taught Sandra early how to milk cows, drive a tractor, and bail hay. But it also cultivated an appreciation for a summer’s walk through a field of clover, an autumn’s trek through a woodlot, and a spring’s rest on a creek bank. Any of which she may allow her favorite characters to do in their quest to solve a mystery.

She is married to her pastor, is a director of women’s ministries, speaker, and Bible teacher. And if you ask, she will show you pictures of her fifteen grandchildren.

View all my reviews
Posted by Connie Porter Saunders at 4:12 PM