Book 2 in the Beauty in Flight series: Harper’s second chance at life will become a second stint in prison if anyone connects those two dead men to her. Nutfield, New Hampshire, is as good a place as any to hide from the murderer Harper left behind in Maryland. All she has to do is lie low and make enough money to keep herself and Red alive until she can figure out who her enemies are. Jack Rossi isn’t sure what to make of his beautiful new tenant and her confused grandfather. Something’s not right, but the love he sees between them and the care she takes of the old man convinces Jack they’re trustworthy. As drawn as he is to Harper, she’s his tenant, so she’s off limits. Derrick, Harper’s ex-boyfriend and Red’s grandson, needs to find his grandfather and get his hands on the old man’s money before Derrick ends up with a bullet in the skull. And when he gets his hands on Harper, she’ll be sorry for what she’s put him through. Harper and Jack grow closer, but so do her enemies. If Harper can’t trust Jack with the truth, she may lose more than just this glimpse of true love. She may lose her freedom—or her life.

Harper Cloud is a beauty in hiding and it is apparent that her looks have been more of a curse than a blessing. In fact, Harper considers her beauty to be a major curse because many men have been attracted to her face and body but cared nothing for the person inside.  A series of bad decisions and bad relationships have left her with a prison record and the need to flee with the older man that she has been caring for as a nurse companion. Dangerous events have forced Harper and  Harold "Red" Burns to seek shelter in a small town and their lives have become an ongoing series of struggles. Harper struggles to find a job, to provide food for them, and to keep them safe from Red's only living relative, his grandson Derrick.  Red Burns ("Gramps") faces his own struggles as he alternates between feelings of fear, anger and hostility and his ever increasing loss of memory as his dementia continues to worsen.

I truly enjoyed Beauty in HIding and author Robin Patchen has created some complex and intriguing characters. Harper Cloud is so loving and caring but she has a hard time believing that she will be truly loved in return. Many men have been attracted to her face and body but they cared nothing for the person inside. Trust is definitely an issue and she certainly doesn't believe that her landlord Jack Rossi has honorable intentions as he befriends his two new tenants. He feels drawn to both of them but his efforts to help them are met with great resistance from Harper.

This story is filled with danger, secrets, addiction, murder and so many unanswered questions but there is also an underlying theme of faith. Reminders that believing in God is the only true path to peace and acceptance are scattered throughout the book and we are allowed to witness Harper's growth as a Christian.

"What had Gramps told her? God's word was a lamp unto her feet? She wished it was more like a street lamp and less like a cheap flashlight with a dying bulb."

Beauty in HIding is book two in the Beauty in Flight trilogy but I didn't feel lost reading this book first.  The third book, Beauty in Battle, is definitely on my TBR list so that I can see what the future holds for Harper Cloud. Can she protect "Red" from his own grandson? Will she finally find the happiness that she deserves? Is Jack Rossi the person who will convince her to trust again?

I received a complimentary copy from Celebrate Lit but these are my honest opinions. 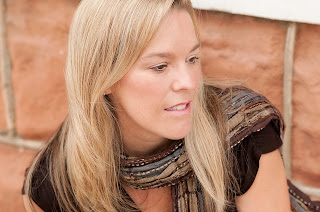 Aside from her family and her Savior, Robin Patchen has two loves—writing and traveling. If she could combine them, she’d spend a lot of time sitting in front of her laptop at sidewalk cafes and ski lodges and beachside burger joints. She’d visit every place in the entire world—twice, if possible—and craft stories and tell people about her Savior. Alas, time is too short and money is too scarce for Robin to traipse all over the globe, even if her husband and kids wanted to go with her. So she stays in Oklahoma, shares the Good News when she can, and writes to illustrate the unending grace of God through the power and magic of story.

I was raised in a Christian home. Our parents took my sister, my brother, and me to church every Sunday. They taught us right from wrong, but eventually, kids have to make their own choices. In my case, I chose wrong for a long time. Don’t misunderstand: I was always a pretty nice person. I wasn’t a thief, and I didn’t kill anybody, but I made a lot of bad decisions. Sinful decisions. I discovered that one bad choice often led to the next and the next until I was trapped in a life of my own making with no idea how to get out. But God… two of my favorite words in the English language. God had a different plan, and He pulled me out of the muck and changed my life. He showed me that I was not the person I’d been acting like. He showed me who I was, and He taught me to walk in the truth of my identity. Harper Cloud isn’t me, not at all. First of all, she tall and blond and drop-dead gorgeous. More than that, her choices are nothing like mine were. But she’s in the same boat I was. Thanks to a series of bad decisions, Harper was in a hole, and she didn’t know how to get herself out of it. She used drugs to quiet the condemning voices and told herself lies to make herself feel better. Someday, she told herself, she’d get her life together enough to go home to her parents. Because she couldn’t go when she was a mess. She couldn’t go until she’d done something they could be proud of. Thanks to a bad choice in boyfriend, Harper not only didn’t go home, she ended up in prison. Harper’s story begins two years after she’s released. It’s the story of a woman desperate to be free of her past, clinging to hope when there’s every reason to despair, and desperate to believe what she’s been told about this Savior, Jesus Christ. Harper will learn about love and redemption and salvation in the course of the three books that make up the Beauty in Flight series. That is, if she can survive the danger that seems to follow her wherever she goes. 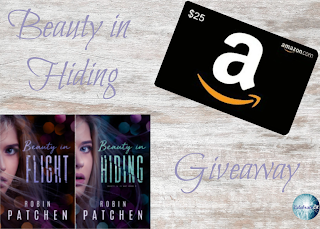 To celebrate her tour, Robin is giving away a grand prize of a $25 Amazon gift card and the entire Beauty in Flight Series!!
Be sure to comment on the blog stops for nine extra entries into the giveaway! Click the link below to enter. https://promosimple.com/ps/de7a/beauty-in-hiding-celebration-tour-giveaway