When Cohen Marah steps over his father's body in the basement embalming room of the family's funeral home, he has no idea that he is stepping into a labyrinth of memory. As the last one to see his father, Cohen is the primary suspect.
Over the next week, Cohen's childhood memories come back in living color. The dramatic events that led to his father being asked to leave his pastoral position. The game of baseball that somehow kept them together. And the two children in the forest who became his friends--and enlisted him in a dark and dangerous undertaking. As the lines blur between what was real and what was imaginary, Cohen is faced with the question he's been avoiding: Did he kill his father?
In Light from Distant Stars, master story weaver Shawn Smucker relays a tale both eerie and enchanting, one that will have you questioning reality and reaching out for what is true, good, and genuine. 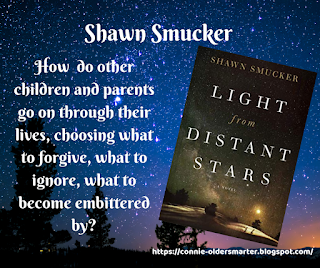 Light from Distant Stars by Shawn Smucker
My rating: 4 of 5 stars

Cohen Marah is a middle-aged man trying to reconcile himself to his father's eminent death and the fact that he may have contributed to the cause. As he waits by his father's bedside and deals with police questions about his father's accident Cohen recalls his life until this moment and his reflections alternate between the present setting of 2015 and flashbacks to his youth. Memories of being a young boy infatuated with his Sunday School teacher and fidgeting during his father's Sunday sermons; his strict and unyielding mother who was the actual author of his father's sermons; and Cohen's secret discovery that eventually tore his family apart. The divorce that prompted Cohen's mother to move with his sister to the city left Cohen to spend the rest of his youth living with his father in the funeral home that was now the family business. It is this constant reminder of death and the people that he met during this time that helps us understand the complicated man that Cohen Marah has become!

Light from Distant Stars has mystery, circumstances that suggest the paranormal, and the implication that most families are not as they seem. As he stands by his comatose father's bedside with his sister and mother "Cohen wonders how other children and parents go on through their lives, choosing what to forgive, what to ignore, what to become embittered by."

This story reminds us that we all fall short but we all deserve forgiveness. Light from Distant Stars wasn't an easy book for me to read but oh, I am so glad that I did!

I received a complimentary copy from the author and publisher but I am voluntarily sharing my opinions in this review.

View all my reviews
Posted by Connie Porter Saunders at 12:06 AM