Until the Mountains Fall (Cities of Refuge, #3) by Connilyn Cossette

Recently widowed, Rivkah refuses to submit to the Torah law compelling her to marry her husband's brother and instead flees Kedesh, hoping to use her talents as a scribe to support herself. Without the protections of her father, Kedesh's head priest, and the safety of the city of refuge, Rivkah soon discovers that the cost of recklessness is her own freedom.
Malakhi has secretly loved Rivkah for years, but he never imagined his older brother's death would mean wedding her himself. After her disappearance, he throws himself into the ongoing fight against the Canaanites instead of dwelling on all he has lost. But with impending war looming over Israel, Rivkah's father comes to Malakhi with an impossible request.
As the enemies that Rivkah and Malakhi face from without and within Israel grow more threatening each day, is it too late for the restoration their wounded souls seek?

Until the Mountains Fall by Connilyn Cossette
My rating: 5 of 5 stars

Each time I read a new book by Connilyn Cossette, I believe that it is her best work yet and Until the Mountains Fall is no exception! I consider Cossette to be one of the best biblical fiction authors currently writing books and I am always amazed with her ability to tell a fictional story that has us hanging on to every word but still remain true to the biblical account that she has used as her background. This is the third book in her Cities of Refuge series and it features a strong-willed young woman who has suddenly lost her husband and is now expected to marry his younger brother to fulfill the laws concerning a Levirite marriage: the brother of a deceased man is obliged to marry his brother's widow. Rivkah rebels against this because Malakhi is two years younger than her, just sixteen, and he has teased and bullied her for years. How can she even contemplate being married to such a person? 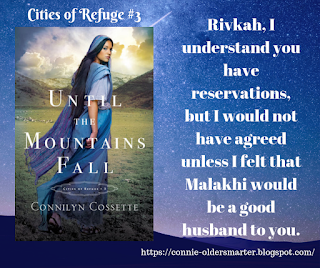 This book relates her journey as she runs from her home, away from her father who is a priest and an advocate for this marriage, away from the young man who has secretly loved her for years and is more than ready to take her as his wife. Her flight also takes her from the protection that a City of Refuge offers and she faces danger and uncertainty. Over the next five years, on their separate journeys, Rivkah and Malakhi mature into humble servants and gain the wisdom that comes with age. It is when they are once again drawn together that Rivkah realizes that she may have run from the biggest blessing of her life, the love of Malakhi. 'Somehow, over these past two months, I'd discovered that life without the man I'd once thrown away was unthinkable.' And as she prays to her Heavenly Father for Malakhi's safety, she realizes that her own earthly father has probably been praying for her and pleading for her safe return! 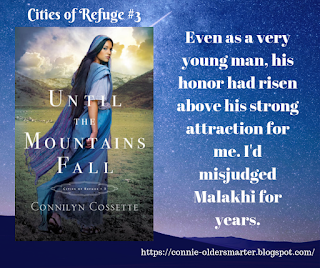 Until the Mountains Fall is a beautifully written story that features two love stories: the breathtaking romance between a woman and the man who never gave up on her and the powerful love that God has for His children. Cossette's theme is one that we all need to remember---no matter where we go and no matter what we do, we all can experience redemption and forgiveness. All of us can enjoy a homecoming like the prodigal son that is recorded in Luke 15, or in this case, the homecoming of a prodigal daughter!


I received a complimentary copy from the author and publisher and I am voluntarily sharing my thoughts in this review. 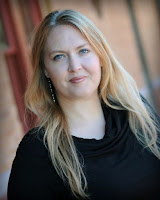 Connilyn Cossette is the CBA-Bestselling, Christy Nominated author of the Out from Egypt Series and the Cities of Refuge Series from Bethany House Publishers. When she’s not engulfed in the happy chaos of homeschooling two teenagers, devouring books whole, or avoiding housework, she can be found digging into the rich ancient world of the Bible. She delights in discovering new gems of grace that point to Jesus and weaving them into an immersive fiction experience. Although she and her husband have lived all over the country in the last twenty-plus years, they currently call North Carolina home.

You can learn more about this author at https://www.connilyncossette.com/

View all my reviews
Posted by Connie Porter Saunders at 10:02 AM