The venture ahead could leave their friendship behind.
Made a safe-haven after the Civil War, Ironwood Plantation is a refuge of equality for former slaves. But twenty years and a new generation later, they have become an isolated community with little contact with the rest of the world.
Mercy Carpenter is everything the world thinks she shouldn’t be. Educated and adventurous, she longs to make a life for herself beyond the beautiful prison of Ironwood. When she secretly submits an article to the Boston Globe under a man’s name and receives an enthusiastic response and an offer for employment, she’s determined to take advantage of the opportunity. But she isn’t prepared for a startling world that won’t accept her color or her gender, and her ambitions soon land her in grave danger.
The privileged daughter of a plantation owner and an aspiring suffragette, Faith Harper is determined not to marry. Especially not her father’s opportunistic new business partner. She doesn’t want any man telling her what to do, least of all the annoyingly chivalrous Nolan Watson. But when Mercy goes missing, Faith will do anything to find her best friend, even if it means trusting a man she doesn’t understand. In a time where prejudices try to define them, Mercy and Faith must push the boundaries of their beliefs and trust in the God who holds the keys to freedom.

These are the words found in a diary that relates what occurred in the lives of two young women in Oakville, Mississippi in 1887. Mercy Carpenter has decided to leave Ironwood Plantation to make a new life elsewhere. She has lived there and been safe at the plantation but she believes that there's so much more waiting outside of these boundaries. She's heard that there are wonderful opportunities in the North but she doesn't anticipate what she will encounter-- prejudices aren't just race related because there can also be prejudices about gender! What follows is a story of danger, uncertainty, and disappointment as Mercy leaves the plantation, Faith sets out to find the black woman who is more like a sister than a friend, and they both encounter unknown consequences.

Ironwood Plantation was supposed to be a haven for freed slaves but instead, it had almost become a prison and Stephenia McGee paints a poignant picture with Faith's realization that 'Truth be told, Faith had thought little of the opportunites afforded to her, while at the same time expecting that Mercy should be grateful for a safe place and stay quietly at home.'

This is the third book of the Ironwood Plantation Family Saga and McGee has created memorable characters and exciting events to conclude this series. The Civil War is one of my favorite eras and this novel is set twenty-two years after the end of this war. It reaffirms what I've read before: that the end of the war wasn't the end of the hate and prejudice that had bound the United States for so long.

This is a story of the search for freedom and for affirmation and it shares the universal need for hope, faith, and perseverance. There is also the possibility of romance for both Mercy and Faith but the real love story is the love between the two of them and this book reminds us once again that love isn't determined by blood ties or family relations. If you enjoy historical fiction and Christian romance you will certainly want to read Missing Mercy.

I received an advanced reader copy of this book but a positive review was not required. These are my honest thoughts. 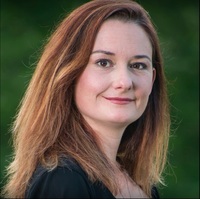 Stephenia H. McGee is a wife, mother of two very active little boys, author, and lover of history. She currently lives in Mississippi with her husband and sons where she writes stories of faith, redemption and the deep south.

View all my reviews
Posted by Connie Porter Saunders at 1:50 PM