Young line producer Danny Byrd is well-known in Hollywood for being someone who gets things done on time and under budget. But when his reputation takes a beating after his partner--and former best friend--makes off with their investors' money, Danny has but one chance to redeem himself and restore his ruined career.
LA lawyer Megan Pierce has sacrificed years of her life proving herself to her impossible bosses only to find herself disgusted at their snobbery and their specious business practices. When an opportunity to actually make a difference comes her way, she knows she has to grab it--even though she's not entirely clear what "it" is.
Danny and Megan are each other's best hope for redemption. What they never could have imagined was that they might also be each other's best hope for love.
Bestselling and award-winning author Davis Bunn takes you into the beating heart of Hollywood with two characters determined to thrive in a cutthroat business.

Many of our perceptions about the film industry come from what we see in movies or on television. Author Davis Bunn shares a fictional tale of what happens behind the scenes in Hollywood and Los Angeles and it is intriguing, to say the least. Danny Byrd was successful and enjoyed a good reputation until his partner and best friend took off with their investor's money. Suddenly, Danny finds himself in jail, in need of a lawyer, and attorney Megan Pierce thinks that he just may be the client she has been looking for. Megan is sick of the tactics that some successful law practices choose and she is seeking to justify why she should remain a lawyer.

The story that Bunn tells in Unscripted shows just how far we sometimes fall and how hard it is to climb out BUT it proves that it is possible to be redeemed! Even when hope seems gone and our efforts seem useless, redemption is possible! And it is never too late to find friendship, loyalty, and romance!

Bunn is an accomplished author but he is also a script-writer so his knowledge of the film industry adds authenticity to this story that is filled with betrayal and suspense. For me, however, this is a story of learning to accept, forget, and forgive or as Annie mentions on page 178, 'A chance to love through sorrow. Turn the corner and stop making it about yesterday. Make it about tomorrow.'

I enjoyed Unscripted and I recommend it to readers who enjoy legal thrillers and Christian fiction.

I received a copy of this book from Revell and I am voluntarily sharing my own thoughts in this review. 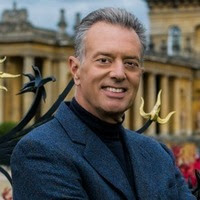 Davis Bunn is an internationally-acclaimed author who has sold more than seven million books in twenty languages.
Honored with four Christy Awards for excellence in historical and suspense fiction, Davis was inducted into the Christy Hall of Fame in 2014.
His bestsellers include The Great Divide, Winner Take All, The Meeting Place, The Book of Hours, and The Quilt. A sought-after lecturer in the art of writing, Bunn was serves as Writer in Residence at Regent's Park College, Oxford University.
Davis Bunn also writes under the names Thomas Locke (for his epic fantasy and techno-thriller novels) and T. Davis Bunn (for books published prior to 2002).

View all my reviews
Posted by Connie Porter Saunders at 5:49 PM