The End of the Magi by Patrick W. Carr

Following his vision of the coming Messiah, the prophet Daniel creates a select group of men who will count down the calendar to the arrival of Israel’s promised king. Centuries later, as the day nears, Myrad, a young magi acolyte, flees for his life when his adoptive father and others are put to death by a ruthless Parthian queen.
Having grabbed only a few possessions, Myrad escapes the city, and searching for a way to hide from the soldiers scouring the trade routes, he tries to join the caravan of the merchant Walagash. The merchant senses that Myrad is hiding secrets, but when the young man proves himself a valuable traveler, an epic journey filled with peril, close escapes, and dangerous battles begins.
With every day that passes, the calendar creeps closer to the coming Messiah. And over everything shines the dream of a star that Myrad can’t forget and the promise that the world will never be the same.

As I read this book, I found myself turning to my Bible and I also 'googled' to see what was fact and what was fiction. It is very apparent that Patrick W. Carr has devoted a lot of time to research this book that relates the prophet Daniel's prediction as to when the Messiah would be born. The book begins in 537 BC Babylon and readers are given a story of danger, adventure, and deep faith, as the Magi, or wise men, begin their watch. The End of the Magi centers on Myrad and his dream that shows a huge star that appears to be stationary in the sky. It is as his journey continues, made more difficult because of his club foot, that he continues to dream and it is in one dream that he is told "Behold", the voice said, "the promised one has been born."'

The Last of the Magi is filled with historical details and Bible scripture but Carr also adds wonderful human interest. I was especially touched by the description of the Magi finally meeting Mary, Joseph, and Jesus and reading Mary's explanation of all that had occurred. I also enjoyed seeing Myrad emerge from being very self-conscious about his club foot to a confident man who had found the Messiah and also the love of a young woman. But it his witnessing The Day of Pentecost and hearing Simon speak in his native Persian language that brought me to tears. That night, as he gathered with his friends and they shared the bread and the wine, Myrad wondered 'Would anything be ordinary again?' After reading this book, I know that I won't because this book has increased my understanding of all of these events. The End of the Magi is a must-read for those who enjoy biblical fiction!

I received a copy of this book from Bethany House but I wasn't obligated to leave a positive review. This are my own thoughts. 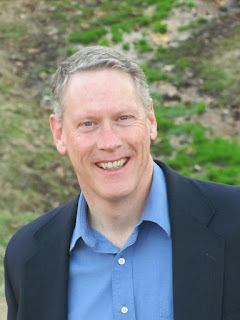 Patrick Carr was born on an Air Force base in West Germany at the height of the cold war. He has been told this was not his fault. As an Air Force brat, he experienced a change in locale every three years until his father retired to Tennessee. Patrick saw more of the world on his own through a varied and somewhat eclectic education and work history. He graduated from Georgia Tech in 1984 and has worked as a draftsman at a nuclear plant, did design work for the Air Force, worked for a printing company, and consulted as an engineer. Patrick’s day gig for the last five years has been teaching high school math in Nashville, TN. He currently makes his home in Nashville with his wonderfully patient wife, Mary, and four sons he thinks are amazing: Patrick, Connor, Daniel, and Ethan. Sometime in the future he would like to be a jazz pianist. Patrick thinks writing about himself in the third person is kind of weird.

View all my reviews
Posted by Connie Porter Saunders at 11:47 AM