After the rival McLean clan guns down his cousin, Colman Harpe chooses peace over seeking revenge with his family. But when he hears God tell him to preach to the McLeans, a failed attempt to run away leaves him sick and suffering in their territory. He soon learns that appearances can be deceiving, and the face of evil doesn't look like he expected

I am so in love with this book and it is now a part of my favorite book list. Sarah Loudin Thomas has completely captured the culture of Appalachia and much of what she mentions is native to my area of Kentucky. Blackberry Winter; the odor and taste of milk when cows have eaten in a pasture field filled with spring onions; a meal with cornbread and greens, followed by spreading apple butter on that cornbread for dessert. So familiar to many of us but so foreign to those who have grown up elsewhere. I also love the deadly family feud depicted between the Harpe and the McLean families because I have grown up with the legendary feud between the Kentucky Hatfields and the West Virginia McCoys. What is most appealing to me, however, is Colman Harpe's desire to become a preacher but wanting to do it on his own terms. How could God expect him to preach to the people who have been enemies of his family for generations, especially Serepta McLean, the meanest and most powerful woman around their area of West Virginia? But that is what God wants him to do and Colman's reluctance parallels the biblical Jonah's efforts to avoid going to Ninevah. 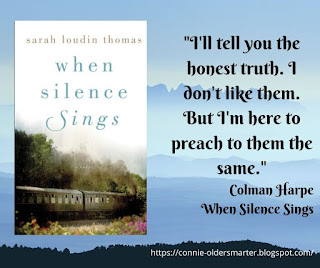 When he finally realizes that he MUST heed God's call, his first chance to minister is with a group of McLean women that he encounters as they mend their clothing while sitting under a circle of dogwood trees. At a loss of what to say, Colman tells them about the legend of the dogwood tree and its role in Jesus Christ's crucifixion. As they sit mesmerized by his story, he realizes that the best way to reach the McLean family might not be through traditonal preaching. Maybe, Colman thought, he could use stories and illustrations to share God's message. After all, isn't that what Jesus did through his parables?

Thomas has created so many fascinating characters. Colman Harpe; Ivy Gordon, the young woman who is feared because of her lack of skin pigmentation but gifted with amazing medical skills; Charlie, Serepta McLean's black houseman who understands her like no one else; and Emmaline, the little girl who changes the lives of so many people. It is, however, Serepta who stole my heart. No, she isn't a good person or a model citizen but Serepta is the person that I would like to see in another story. I believe that her ability to serve God could be as powerful as her ability to bootleg illegal liquor and run an empire! 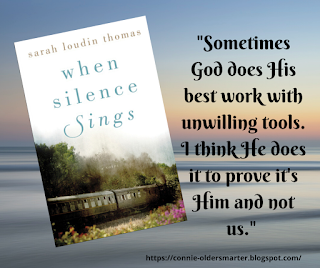 There is a suggested romantic connection between Colman and Ivy but When Silence Sings isn't your usual love story. It is instead a tale filled with the many different emotions that influence our lives and God's amazing ability to turn hatred and pride into acceptance and understanding. Sarah Loudin Thomas has created a wonderful story and I recommend When Silence Sings to all who enjoy Christian fiction and family drama.

I received a copy of this book from the author and Bethany House but a positive review was not required. These are my honest opinions. 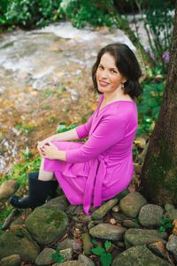 I’m a Christian, wife, fundraiser and writer living near Asheville, NC. I grew up on a 100-acre farm in French Creek, WV. I used to say “rural WV,” but realized that’s largely redundant. I LOVE my home state and the fact that I’m the seventh generation to grow up on the family farm. My love of the Appalachian Mountains informs my writing. I want you to be as wild about these hazy, blue mountains and the wonderful people who live in them as I am.
I’ve been married for 23 years and I not only love my husband, I really, really like him. We started our journey together with three big dogs–Crockett, Precious and Sammy. We now have one small dog that requires more energy than the first three did together.

View all my reviews
Posted by Connie Porter Saunders at 9:44 PM