The Year the Stars Fell by Elizabeth A. Wehman: Review & Giveaway with Celebrate Lit 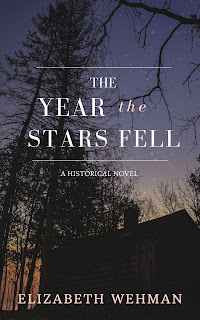 In the spring of 1833, newlywed Betsey Baker-Swain’s simple life changes when she and her husband, Aaron, make a hasty decision to join Betsey’s family on a move from Pennsylvania to Michigan Territory.

Along the way, rainstorms, freezing temperatures, seasickness, and lack of privacy pale in comparison to what the family will encounter once arriving at their destination. Soon, daily trials will include ear-piercing howls of wild wolves, bad weather, clouds of mosquitoes, and disturbing situations with the natives. Even then, Betsey wonders if this trip will finally quench her father’s adventurous spirit.

Over the next year, the Baker family will gain incredible strength, divine trust, and unexplainable courage, but will it be enough to keep them at the tiny cabin by the twisting Shiawassee River? Will uncertainty overtake their determination or will God’s intervention sustain them enough to become a part of the history of a new land?

I love it when a story can teach me as it entertains and this is certainly true of The Year the Stars Fell, It is an excellent historical fiction novel based on the life of Hosea Baker and his family as they traveled from Pennsylvania to the Michigan Territory in 1833 to begin a new life. Author Elizabeth Wehman takes us with them as they were plagued with wild animals, rugged terrain, and their fear of Indians. They also faced extreme hardship as they settled the land and were tormented by mosquitoes. Some even fell ill from a fever that was caused by mosquito bites but through it all, Hosea continued to trust in God.

"Trusting God when things are out of our control is when He shines the brightest. I've relied on God to protect my family, but most of all," Hosea pointed toward the sky, "I've relied on Him to take away the fear that often creeps into my heart."

In her author's notes, Wehman reveals more true details about this family's contribution to the settling of New Newburg and I enjoyed learning about another event that occurred in 1833. I had never heard of the Leonid Meteor Shower that looked as if the sky was falling and was visible across much of the United States in November of 1833. Including it near the end of this book was a lovely way to tie Hosea's joy of studying the stars with his deep trust in their Maker.

The Year the Stars Fell is an inspiring story filled with hope, faith, and perseverance and I recommend it to all who enjoy historical Christian fiction.
I voluntarily received a copy of this book from Celebrate Lit. A favorable review was not required and this is my honest opinion.
My rating: 4 of 5 stars 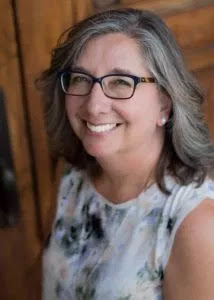 Her dream has always been to write novels and Elizabeth launched her first contemporary fiction, Under the Windowsill, in 2014. Since then, she’s added four titles to her shelf. They include: Promise at Daybreak, Just a Train Ride, Mere Reflection, and her latest complete historical work, The Year the Stars Fell.

She found the historical genre to be filled with rabbit trail research as well as walks through bygone cemeteries. The pioneers, of the early nineteenth century, reflected an amazing stamina and a determined courage to venture into the unknown.
The Year the Stars Fell is based on a forgotten village established in the Territory of Michigan in 1833. She fell in love with the Baker family and the information she discovered about them gave way to folklore and tales of the early homesteaders. Two future novels are planned that will include the continuation of the nineteenth century farming community. The series will be called, ‘The Newburg Chronicles’.

In her spare time, Elizabeth loves to read and enjoys being out in nature. Her favorite places are digging in her flower garden, listening to the birds as they herald a new day, or taking a walk on the country roads surrounding her home in Michigan.

Elizabeth has been a trucker’s wife for over thirty years which helps supply the needed solitude to produce extraordinary stories. She has three grown children, four grandpuppies, and two sons-in-law.

My “Stars” book began to emerge after doing research about the county where I live, here in Michigan. On an information discovery about another book, I came across the story of the Baker family. They were highlighted as the one of the first farming families to enter Michigan Territory in 1833. Hosea Baker brought his entire family from Pennsylvania to settle on 600 acres in an area beside the Shiawassee River.

Joining him there were his wife, Sally, his grown son Ambrose, his daughter and her husband, Betsey and Aaron Swain, and some younger daughters. While there, they hooked up with a boy named Alexander Stevens. Their first year included: building a home and barn, clearing and planting the first crops in the county, setting up a household, and Betsey giving birth to the first recorded child in the county. Betsey and Aaron named their new baby, Julia.

So much intrigued me about their story. I was excited to flesh it out with the help of short excerpts written in a Shiawassee County history book from 1888. From these short tidbits about the family, I soon embellished a story which is a mere glimpse into what their story could have included during their first year as settlers in a vast wilderness.

Much of the story is from my own imagination, but many of the highlights include the excerpts written about the family in 1888. After writing their story, I now feel a specific kinship to them.  This is my first complete historical fiction work. I hope you enjoy reading it as much as I did writing it.

For Him and My Family, August 27

For the Love of Literature, August 31 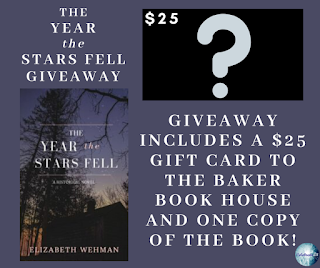 To celebrate her tour, Elizabeth is giving away the grand prize package of a copy of The Year the Stars Fell and a $25 gift card to Baker Book House in Grand Rapids, which can be used online!!
Be sure to comment on the blog stops for nine extra entries into the giveaway! Click the link below to enter.
https://promosimple.com/ps/fff0/the-year-the-stars-fell-celebration-tour-giveaway
View all my reviews
Posted by Connie Porter Saunders at 12:00 AM