The Haunting at Bonaventure Circus by Jaime Jo Wright 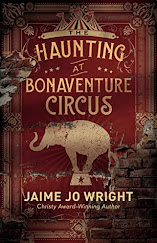 The Bonaventure Circus is a refuge for many, but Pippa Ripley was rejected from its inner circle as a baby. When she receives mysterious messages from someone called the "Watchman," she is determined to find him and the connection to her birth. As Pippa's search leads her to a man seeking justice for his murdered sister and evidence that a serial killer has been haunting the circus train, she must decide if uncovering her roots is worth putting herself directly in the path of the killer.

Present DayThe old circus train depot will either be torn down or preserved for historical importance, and its future rests on real estate project manager Chandler Faulk's shoulders. As she dives deep into the depot's history, she's also balancing a newly diagnosed autoimmune disease and the pressures of single motherhood. When she discovers clues to the unsolved murders of the past, Chandler is pulled into a story far darker and more haunting than even an abandoned train depot could portend.

What could be more intriguing than a book with a beloved baby elephant named Lily and an unknown person known as The Watchman? Especially when they both are such major parts of the story? Once again, Jaime Jo Wright has given readers words to relish, memorable characters that aren't easily forgotten, and two stories, one from the past and the other set in the present, that are connected in ways that I could never dream. Wright's vivid imagination and her descriptive powers make The Haunting at Bonaventure Circus a book to read again, and I found myself going back to read some sections more than once. I just had to make sure that I truly understood what was happening and, I must add, I will never think of a circus in quite the same way as I once did! 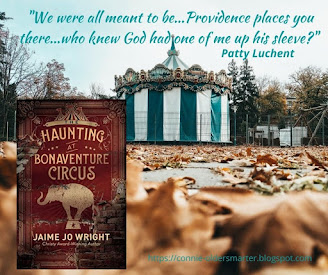 I read Wright's first book, The House on Foster Hill, in 2017 and I knew that I'd found an author to follow, Now, with this fifth book, I can honestly say that her imagination and her writing skills have only gotten better. No one does time-split better and very few authors can give you the same spine-tingling, hair-raising thrills and chills! The Haunting at Bonaventure Circus has all of this, plus a reminder that broken and blemished people are loved by their Creator and are capable of being redeemed by Him!

I absolutely loved The Haunting at Bonaventure Circus and I highly recommend it!

I received a complimentary copy from the publisher. There was no obligation to write a positive review. These are my own thoughts and opinions.

View all my reviews
Posted by Connie Porter Saunders at 8:00 PM