Desire of the Heart by Anne Perreault: Review & Giveaway with Celebrate Lit 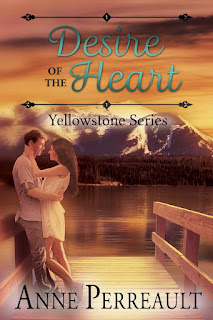 Book: Desire of the Heart

It all started with a hike…

Cady Jackson’s vacation plans were simple. Go to Yellowstone National Park, enjoy the scenery, take lots of pictures. She and her cousin, Ashley, have grown up in a strict, conservative Christian family in upstate New York. Cady has never been encouraged to spread her wings. This trip is an opportunity to do so. Only, she doesn’t know how much her life is about to change when she has an unfortunate encounter in the middle of nowhere.

Why would God take a personal interest in someone like her?

Grant McClintoch generally loves his job as a ranger in the oldest national park in the country. That it includes rescuing stranded visitors to the park is unfortunate. He has been trying to rebuild his life after it had nearly been destroyed. Grant doesn’t realize that God isn’t done with him yet when he stumbles onto an injured hiker.

But can he place his past in God’s capable hands where it belongs?

Desire of the Heart is a lovely story and its realistic characters and beautiful setting kept me intrigued until the very end. Cady Jackson has lived a very sheltered life in New York state and vacationing at Yellowstone National Park seems like a dream but bear encounters and witnessing a man being shot by poachers makes it more like a nightmare. Grant McClintoch is a park ranger who has lost his wife and daughter in a tragic accident. He feels that God has abandoned him and Cady's been taught to strictly abide by God's laws. Is it possible for these two people to find a common ground in their belief?

Much of the romance and adventure in Desire of the Heart takes place at our nation's oldest national park. I've always wanted to visit Yellowstone and I felt like author Anne Perreault was my personal tour guide as she described the scenery around this beautiful place. The first meeting between Cady and Grant was quite unusual and I enjoyed seeing their relationship develop but it is the strong faith element that I especially appreciated. Bible scripture, prayer, and God's grace are mentioned often in the story.

'She wanted God's plan for her life. It wasn't always sticking to the rules her church had set up. There was room for grace and mercy.'

Desire of the Heart is a Christian romance with exciting adventure and a great faith message. It is definitely a book that I'll want to read again!

I received a copy of this book from the author via Celebrate Lit Book Tours. There was no obligation for a favorable review. These are my own opinions. 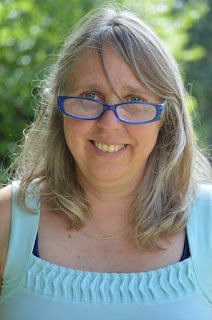 Anne Perreault was born and raised in Germany. By the time she was 14 years old, her family moved to Dubai, UAE. While living in this exotic place, she traveled extensively to various countries around the world. After graduating from an American boarding school in Austria, she attended college in England, where she met her husband. She graduated from New England College with a degree in biology, and settled down in Connecticut. Anne became a horseback riding instructor as well as a certified therapeutic riding instructor. She and a group of friends started a therapeutic riding center in Bristol, CT. During that time, Anne also received a masters degree in secondary education and began to homeschool her three children. While raising their three children, she began to write an inspirational story primarily for her daughter. Anne, her husband, and two of their grown children now reside in Southern Vermont, where they are building their home. Besides writing, Anne enjoys reading, spending time with her husband, grown children, and grand-dogger.

Desire of the Heart…

This book is so special to me. I had been pondering what to write a few years back and the thought came to me that I should base my next character on some of the adorable quirkiness of my beautiful daughter, a young woman filled with integrity and strength. Except, when you first meet her, you might think she’s too naïve or too sweet. She has a fire in her and a passion. And then I watched a TV show and one of the character’s were named Cady. I knew I had my main character. My daughter loves to  travel, and a few years ago, she and her cousin traveled to Scotland together. It was kind of like fiction came to live right then and there. I had already paired Cady up with her cousin, a young woman who is the complete opposite to Cady. Of course, in real life, my daughter and her cousin are incredibly similar to each other and are both such amazing young women of God.

Her counterpart came about because I was looking for someone with strength and also with great integrity, but someone who was wounded by life. I also realized that I wanted to set the story in a national park. I’ve always enjoyed nature and wanted my main character to be working in some capacity with nature. Grant naturally became a park ranger. It fit his personality so well, I secretly rubbed my hands together in glee.

Setting the story at Yellowstone allowed me to research that beautiful part of the country. I have always been a wildlife enthusiast. My oldest son loves wolves and has studied them all his life. I wanted to include wolves in the story… enough said. I fell completely in love with the park and I will one day travel there and stand where Grant and Cady did.

For Him and My Family, November 2

Because I said so — and other adventures in Parenting, November 6

Through the Lens of Scripture, November 9

Spoken from the Heart, November 14 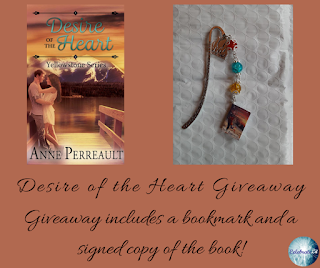 To celebrate her tour, Anne is giving away the grand prize package of a bookmark and a signed copy of Desire of the Heart!!