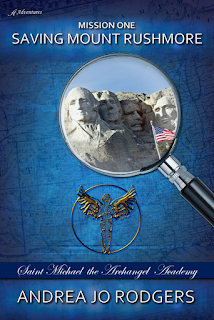 When John Jenkins’ parents ship him off to stay with his aunt, he’s certain it will be the worst summer ever—until he learns he’s been accepted into a top-secret school. St. Michael’s Academy is home to gifted students with extraordinary talents. Although John has no idea why he’s there, he’s assigned to Team Liberty, who assist authorities with solving low-level crimes. Their first mission: stop a trio of mischief-making teens from vandalizing Mount Rushmore. John battles feelings of inferiority as he and Team Liberty compete against Devlin Black and his cronies to track down clues and solve puzzles at Mount Rushmore. Along the way, John makes several key contributions, and his self-confidence grows. When he discovers he was admitted to the school due to a clerical error, he’s mortified. Now, he’s strictly an “observer” until the mission’s end. But when his teammates run into trouble, John must summon up the courage to save Mount Rushmore, and he learns an invaluable lesson: every person has special God-given gifts—including him.

'They stepped into the mirror. and in an instant, Whoosh! As John felt himself being sucked along the tunnel, he couldn't help but wonder what adventures lay ahead.'

This entertaining book by author Andrea Jo Rodgers targets middle grade students and she makes it both fun and educational with her use of clues, secret codes, intriguing puzzles, and yes, a magic mirror. John and the three other students in Team Liberty are required to use both knowledge and wits in a special mission to save Mount Rushmore so this gives Rodgers a chance to throw in lots of historical facts and interesting information about this national treasure. She also creates moral issues that pose questions of what is right and wrong and she shares a faith message that encourages young people to rely and trust in God. Most of all, she uses John's belief that he is only average to stress the fact that all of us have special talents. Some are spectacular and some may be small, but they are all gifts from God. John's self-esteem greatly improves and this is wonderful motivation for young people reading the story!

I am much older than the suggested target audience but I certainly enjoyed Saving Mount Rushmore and it's made me want to read more in the Saint Marshall the Archangel Academy series.

I received a copy of this book from the author via Celebrate Lit. A favorable review wasn't required and no monetary compensation was given. These are my own thoughts. 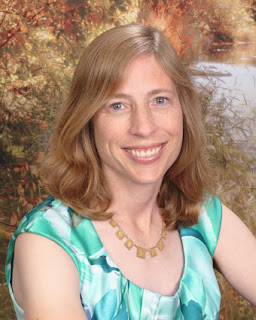 Andrea Jo Rodgers is the author of award-winning Christian middle grade fiction as well as inspirational adult nonfiction novels. She holds a clinical doctorate in physical therapy and specializes in women’s health, orthopedics, and lymphedema. She has served her community as a volunteer emergency medical technician for over thirty years, responding to more than 8,200 first aid and fire calls. She lives on the east coast with her husband, two children, and their two rescue dogs, a Shih Tzu and a Dachshund.

Can John embrace his God-given gifts in time to save Mount Rushmore?

Have you ever admired the extraordinary talent of another person? Perhaps you enjoyed listening to someone belt out a spellbinding rendition of your favorite song at church or a concert. Or, maybe you have dreamed that you’d gain the same athletic prowess of a professional sports player.

The amazing gifts of others can take many forms. These gifts may be linked with intelligence, such as an aptitude for math and engineering. They may reflect the beauty of the arts through singing, dancing, or painting. Certain individuals may dazzle the people around them with incredible athletic talents, from gold-medal Olympians to professional baseball, football, and basketball players.

Most people consider extraordinary talents to be God-given gifts. They allow people to stand out and shine among others. However, do each of us need a breathtaking talent to be considered special?

In Saving Mount Rushmore, John Jenkins, an awkward thirteen-year-old teenager, is unexpectedly chosen to attend Saint Michael the Archangel Academy. The top-secret school’s mission is to protect our nation by assisting authorities in solving crimes. Since the academy is for students with extraordinary abilities, John is puzzled as to why he’s been accepted. After all, he’s an average teen without any notable gifts.

While working with Team Liberty to save Mount Rushmore from Devlin Black and Team Mischief, John struggles to discover his special gifts. He’s mortified when he discovers that he’s been accepted to the academy due to a clerical error. He becomes strictly an “observer” until the mission’s end. But when his teammates run into trouble, John must summon up the courage to try to save Mount Rushmore. He learns that every person has special God-given gifts—including him.

I came up with the idea for Saving Mount Rushmore while in the airport, just before our plane departed for the famous landmark. I wrote feverishly the entire flight, and the first chapters were born. Saving Mount Rushmore is a middle grade novel which combines information about Mount Rushmore, adventure, and Christian values. My goal was to write an exciting, fun, educational book for middle grade readers that incorporates Christian values into the fabric of the story. John and his friends have an opportunity to save another national monument in the sequel, Saving the Statue of Liberty. I hope you celebrate our country’s heritage by joining John and Team Liberty in their adventures.

For the Love of Literature, November 18

For Him and My Family, November 22

Because I said so — and other adventures in Parenting, November 30 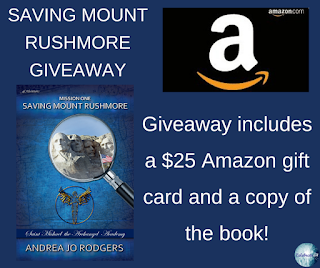 To celebrate her tour, Andrea is giving away the grand prize package of a signed copy of Saving Mount Rushmore: Saint Michael the Archangel Academy, Mission 1 as well as a $25 Amazon gift card!!