A Dance in Donegal by Jennifer Deibel

ABOUT THE BOOK
All of her life, Irish-American Moira Doherty has relished her mother's descriptions of Ireland. When her mother dies unexpectedly in the summer of 1920, Moira decides to fulfill her mother's wish that she become the teacher in Ballymann, her home village in Donegal, Ireland.After an arduous voyage, Moira arrives to a new home and a new job in an ancient country. Though a few locals offer a warm welcome, others are distanced by superstition and suspicion. Rumors about Moira's mother are unspoken in her presence but threaten to derail everything she's journeyed to Ballymann to do. Moira must rely on the kindness of a handful of friends--and the strength of Sean, an unsettlingly handsome thatcher who keeps popping up unannounced--as she seeks to navigate a life she'd never dreamed of . . . but perhaps was meant to live.Jennifer Deibel's debut novel delights the senses, bringing to life the sights, sounds, smells, and language of a lush country and a colorful people. Historical romance fans will embrace her with open arms.
MY THOUGHTS.....
I love reading about the Emerald Isle and A Dance in Donegal is an enjoyable new book that indulges my fascination with Ireland. After her mother's sudden death, Moira Doherty leaves Boston to accept a teaching job at Ballyman in Donegal, Ireland. Author Jennifer Deibel poignantly describes Moira's alternating feelings of sorrow, excitement, and anxiety over this sudden change in her life plans, and we also witness Moira's puzzlement upon meeting some of the residents after her arrival. Why would these strangers be suspicious of someone they don't even know? 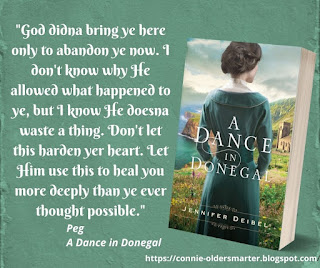 This is Deibel's debut novel and her lyrical words paint a beautful picture of a small fictional village as it might have been in 1920. Gaelic words and references to Irish customs add to the book's authenticity, and mystery and romance help to increase its appeal. If you enjoy historical fiction with intriguing characters and a strong faith element, you will want to add A Dance in Donegal to your TBR list!

I received a complimentary copy from the author and publisher. There was no obligation for a positive review and these are my honest thoughts.


My rating: 5 of 5 stars
ABOUT THE AUTHOR 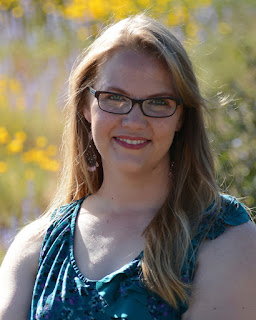 Jennifer Deibel is a middle school teacher whose work has appeared on (in)courage, on The Better Mom, in Missions Mosaic magazine, and others. With firsthand immersive experience abroad, Jennifer writes stories that help redefine home through the lens of culture, history, and family. After nearly a decade of living in Ireland and Austria, she now lives in Arizona with her husband and their three children.

View all my reviews
Posted by Connie Porter Saunders at 2:59 PM