Braced for Love (Brothers in Arms #1) by Mary Connealy 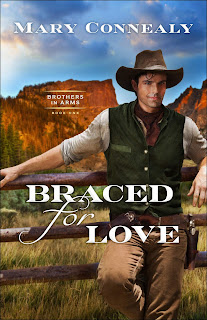 Left with little back in Missouri, Kevin Hunt takes his younger siblings on a journey to Wyoming when he receives news that he’s inheriting part of a ranch. The catch is that the ranch is also being given to a half brother he never knew existed. Turns out, Kevin’s supposedly dead father led a secret and scandalous life.

But danger seems to track Kevin along the way, and he wonders if his half brother, Wyatt, is behind the attacks. Finally arriving at the ranch, everyone is at each other’s throats and the only one willing to stand in between is Winona Hawkins, a nearby schoolmarm.

Despite being a long-time friend to Wyatt, Winona can’t help but be drawn to the earnest, kind Kevin–and that puts her in the cross hairs of somebody’s dangerous plot. Will they all be able to put aside their differences long enough to keep anyone from getting truly hurt?

Kevin Hunt is the main focus of this western that is sometimes funny, often mysterious, but always enjoyable! Author Mary Connealy includes fights, ambushes, and unknown villains, but there's also a sweet romance that grows between Kevin and Winona Hawkins, the schoolmarm who finds herself torn between her long-time friend Wyatt and this new guy that's shown up at Bear Claw Pass, Wyoming. Kevin is such a kind character and I found his devotion to his two younger siblings especially endearing. Their mother's death thrust him into the role of father when he was just fifteen, and he's done his very best to provide a home for Molly and Andy! Now, he has to accept that his father had more than one wife and apparently, more than one son!

Braced for Love is a delightful story filled with memorable characters, intriguing suspense, and many laugh-out-loud moments. There's also a strong faith message, and many mentions of prayer, as Kevin, Wyatt, and Falcon Hunt struggle to accept that they are family!

This is the first book in the new series, Brothers in Arms, so I'm 'bracing' myself for more fun and adventure, and the chance to learn more about Wyatt and Falcon. No one does romantic comedy better than Mary Connealy and I definitely recommend Braced for Love to all who enjoy historical Christian fiction!

I received a copy of this book from the publisher. There was no obligation for a positive review.
My rating: 5 of 5 stars
ABOUT THE AUTHOR 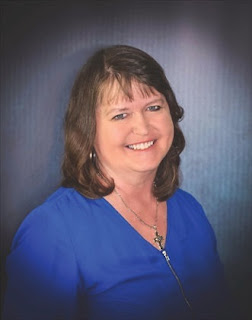 Mary Connealy writes “romantic comedies with cowboys” and is celebrated for her fun, zany, action-packed style. She has more than half a million books in print. She is the author of the popular series Wild at Heart, Kincaid Brides, Trouble in Texas, Lassoed in Texas, Sophie’s Daughters, and many other books. Mary lives on a ranch in eastern Nebraska with her very own romantic cowboy hero.
Learn more at her
Website | Facebook | Twitter | Instagram

View all my reviews
Posted by Connie Porter Saunders at 11:57 PM