Jewel of the Nile by Tessa Afshar

Whispered secrets about her parents' past take on new urgency for Chariline as she pays one last visit to the land of her forefathers, the ancient kingdom of Cush.
Raised as an orphan by her aunt, Chariline has only been told a few pieces of her parents' tragic love story. Her beautiful dark skin is proof that her father was Cushite, but she knows nothing else. While visiting her grandfather before his retirement as the Roman official in the queen's court, Chariline overhears that her father is still alive, and discovering his identity becomes her obsession. Both her grandfather and the queen have reasons for keeping this secret, however, and forbid her quest. So when her only clues lead to Rome, Chariline sneaks on the ship of a merchant trusted by friends.Theo is shocked to discover a stowaway on board his vessel and determines to be rid of her as soon as possible. But drawn in by Chariline's story, he feels honor-bound to see her safely to shore, especially when it appears someone may be willing to kill for the truth she seeks.In this transformative tale of historical fiction, bestselling author Tessa Afshar brings to life the kingdom of Cush and the Roman Empire, introducing readers to a fascinating world filled with gripping adventure, touching romance, and a host of lovable characters--including some they may recognize from the biblical book of Acts.
AMAZON     BARNES & NOBLE     CHRISTIAN BOOK DISTRIBUTOR

Each time I read a book by Tessa Afshar, I find myself doubly blessed. Yes, she writes marvelous stories to satisfy my love for fiction, but she also shares words that both challenge and deepen my faith. I find myself amazed with the depth of her fictional characters, and I often go to my Bible to check many of the details in the story. Jewel of the Nile is certainly no exception. I fell in love with Chariline and Theo, and I found myself eagerly turning pages to see what this young impulsive woman was going to do next, and what Theo would have to do in order to protect her from those impetuous actions. I enjoyed that many other familiar people from the Book of Acts are mentioned, and that Priscilla and Aquilla once again get a chance to shine. I also gained a whole new perception of the encounter between Philip and the Eunuch that is recorded in Acts 8! 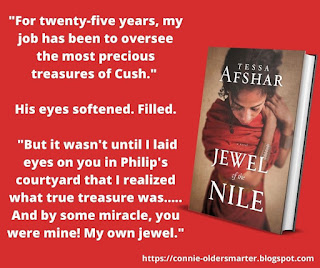 Jewel of the Nile is filled with adventure, danger, and intrigue, as Chariline searches for the father she's never known. There's also a swoon-worthy romance that offers so much more than just physical attraction. Above all, this is a story that offers a powerful faith message. As Priscilla reminds Chariline "The problem is that when you are flesh-driven, you cannot be Spirit-led." This is a remarkable book and I recommend it to all who enjoy biblical fiction.

I received a complimentary copy from the publisher and NetGalley. There was no obligation for a favorable review. These are my own thoughts.
My rating: 5 of 5 stars 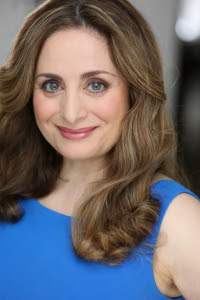 Tessa Afshar is an award-winning author of historical and biblical fiction. Her novel Daughter of Rome was a Publishers Weekly and ECPA bestseller. Land of Silence won an INSPY Award and was voted by Library Journal as one of the top five Christian fiction titles of 2016. Harvest of Gold won the prestigious Christy Award in the Historical Romance category, Harvest of Rubies was a finalist for the ECPA Christian Book Award in the fiction category, and Thief of Corinth was an Inspy Award finalist. Tessa also recently released her first bible study and DVD called The Way Home: God’s Invitation to New Beginnings, based on the book of Ruth.

Tessa was born to a nominally Muslim family in the Middle East and lived there for the first fourteen years of her life. She then moved to England, where she survived boarding school for girls, before moving to the United States permanently. Her conversion to Christianity in her twenties changed the course of her life forever. Tessa holds a master of divinity from Yale University, where she served as co-chair of the Evangelical Fellowship at the Divinity School. She worked in women’s and prayer ministries for nearly twenty years before becoming a full-time writer. Tessa speaks regularly at national women’s events. She is a devoted wife, mediocre tomato grower, and chocolate connoisseur.