Mysteries of the Messiah: Unveiling Divine Connections from Genesis to Today by Rabbi Jason Sobel: Review & Giveaway with I Read with Audra 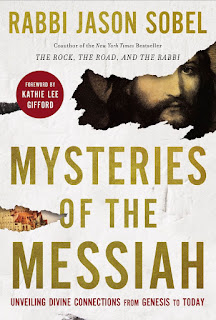 Are you settling for half the story? Highlighting connections that have been hidden from non-Jewish eyes, Rabbi Jason Sobel will connect the dots between the Old and New Testament, helping you see the Bible with clarity as God intended.

Most people—even people of faith—do not understand how the Bible fits together. Too many Christians accept half an inheritance, content to embrace merely the New Testament, while Jewish people may often experience the same by embracing only the Old Testament. But God has an intricate plan and purpose for both the Old and the New.

No matter how many times you have read the Bible, Mysteries of the Messiah will bring fresh perspective and insight. God’s Word, written by many people over thousands of years, is not a random selection of people and stories. Rabbi Jason Sobel connects the dots and helps us see with clarity what God intended.

Let me begin by saying that this isn't a book to quickly read and set aside; instead, it should be read slowly, with a pen and paper nearby. Mysteries of the Messiah offers a unique look at the connection of Jesus to both the Old and New Testaments, and it is full of intriguing information that I've never seen before. The author is Rabbi Jason Sobel, and he assures readers that "Uncovering the mysteries of the Messiah, the divine connection God has woven throughout Scripture, is a lifetime adventure that will never disappoint." Thankfully, Rabbi Sobel offers assistance for our journey, as he uses the Hebrew and Greek alphabet, and the numbers associated with the letters, to shine a light on this 'divine connection'.

Mysteries of the Messiah: Unveiling Divine Connections from Genesis to Today is a fascinating resource that is both enlightening and inspiring. I recommend it to all who want to learn more about the presence of Jesus in both the Old and New Testaments, and deepen their personal relationship with Him!

I received a complimentary copy of this book from the publisher via I Read with Audra. There was no obligation for a positive review, and I am voluntarily sharing my thoughts.

As a young Jewish boy growing up on the streets of New Jersey, I encountered many things that influenced me. My parents and their faith were my heritage, but my friends and their ways were different. It was a little challenging to reconcile everything. But while I became fluent in the culture, even learning how to “rap with my homies,” I remained faithful to our Jewish tradition. Not just because I had to but because I wanted to. Yet I often felt there was something more. At the age of sixteen I found myself one day in a state of meditation. This was something I did regularly as I attempted to figure out things in the midst of a world that was constantly pulling me away from spiritual things. It was an ordinary day but a truly extraordinary experience in that I had a personal encounter with Yeshua. This was the first time I’d ever felt as though the Lord was speaking directly to me. It was so unbelievable and yet so real, and I will never forget His words. He said, “Many are called, but few are chosen.” In my innermost being I knew exactly what he was saying, but I needed to ask, “Lord, am I chosen?” He sweetly smiled and replied, “Yes.” I was overcome by the peace and presence of God— energized and in awe of the experience. I felt as if I were in a state of euphoria. This filling, which was much like an indwelling, kept me in a state of deep contentment. I ran down the steps and into my front yard. Not caring who was watching, I jumped up and down, screaming at the top of my lungs, “I am called to serve Him! I am called to serve Him!” At this same moment my mom pulled into the driveway and saw her good little Jewish son running around in circles like a crazy man for all the neighbors to gawk at. Surely she thought I was mashugana (a Yiddish term describing a person who is nonsensical or silly). I didn’t care; I was so elated by the fact that God, the God who created the universe, wanted to use me. Although she did not understand what was happening to me, my mother did not want to rain on my parade. There was only one problem. I wondered, What does it look like for a nice Jewish boy to begin serving Yeshua? I had no clue. My best friend was John. I met him as part of a wannabe Filipino gang. We became close, practicing martial arts together and discussing spiritual things. By this time, John had become a believer in Yeshua and talked about it with me as often as possible. One day he called and asked, “You went to Hebrew school as a child, right? Do you think you could tell the difference between the Old and New Testaments if I read you some passages?” I said, “Sure.” He read me a passage about this guy dying on a cross and asked if it was from the Old or New Testament.I said, “Obviously it’s from the New Testament because it’s talking about Jesus.” He read another passage: “He was pierced for our transgressions, He was crushed for our iniquities. . . . He was led like a lamb to the slaughter.” Then he asked, “Is this from the Old or New Testament?” I said, “It must be from the New Testament because it sounds like it’s talking about Jesus.” John paused, then said, “It’s from the Old Testament, from Isaiah 53 (vv. 5, 7 niv). Isaiah was a Jewish prophet who lived seven hundred years before the Messiah was born.” That got my attention. After our conversation I agreed to go with John to the messianic synagogue led by Rabbi Jonathan Cahn, who would later write the highly acclaimed and bestselling book The Harbinger.During the service, Rabbi Cahn talked about being “born anew,” but I didn’t think a good Jewish boy should ever do that. However, when he gave the invitation, I stood up. Rabbi Cahn led me in a prayer to receive Yeshua. My friend had prayed to lead one Jewish person to faith in Messiah Jesus, but he never thought it would be me. After the service I was given the first New Testament I had ever seen. I took it home, not quite sure what had just happened, and hid it in my room— God forbid my parents should find it. Of course, Mom did find it and confronted me: “What is this? Don’t tell me you’re a Jew thinking about believing in Jesus!” By then, I had read the New Testament and believed that Jesus was the One that Moses and the prophets had foretold. He was the One who spoke the words of eternal life. My mom was concerned and called our rabbi to meet with me. I knew I needed to verify for myself that Yeshua was the Messiah of the Hebrew Bible. As I studied in preparation for my meeting with the rabbi, I made a list of all the messianic promises and prophecies in the Hebrew Scriptures that I could find. I wanted to make sure I clearly understood and could articulate what I believed about the Messiah based on the Hebrew Bible and Jewish sources. The rabbi asked me how I had come to believe in Yeshua as the Messiah, and I read all the passages that had impacted me. I believe that by discovering the connections between the Old Testament and New Testament, your life can be transformed like mine. I liken it to experiencing your faith in high definition. When you “see” Jesus and the Bible in HD, you enjoy greater richness, sharpness, and clarity of details that you would have otherwise missed. Taken from Mysteries of the Messiah: Unveiling Divine Connections from Genesis to Today by Rabbi Jason Sobel. Copyright 2021 by Rabbi Jason Sobel. Used with permission from Thomas Nelson Publishing. 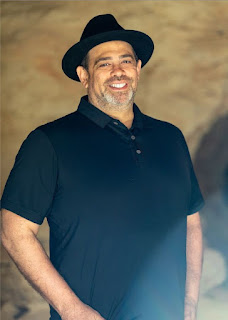 Raised in a Jewish home in New Jersey, Rabbi Jason Sobel dedicated much of his life in pursuit of a spiritual connection with God. After years of seeking and studying, he encountered God and found his true destiny as a Jewish follower of Yeshua (Jesus). Suddenly, all the traditions Rabbi Jason grew up with took on new depth and meaning as God connected the ancient wisdom of the Torah with the teachings of the Messiah.

Rabbi Jason received his rabbinic ordination from the UMJC (Union of Messianic Jewish Congregations) in 2005. He has a B.A. in Jewish Studies (Moody) and an M.A. in Intercultural Studies (Southeastern Seminary). He is a sought-after speaker and has made multiple appearances on national television, including the Trinity Broadcasting Network, the Daystar Network, and the Dr. Oz Show. Rabbi Jason is the author of Breakthrough: Living a Life That Overflows, Aligning with God's Appointed Times, and Mysteries of the Messiah and he is also the coauthor of New York Times bestseller The Rock, the Road, and the Rabbi with Kathie Lee Gifford.

You can learn more at www.rabbisobel.com. 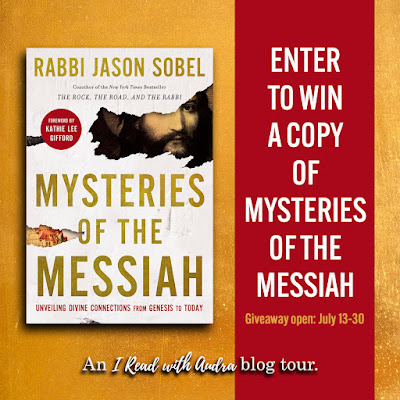 a Rafflecopter giveaway
View all my reviews
Posted by Connie Porter Saunders at 12:00 AM