No Journey Too Far (McAlister Family #2) by Carrie Turansky

A family long divided, a mysterious trunk, and a desperate journey across the ocean--all in the name of love. The epic saga of the McAlisters continues in this riveting sequel to No Ocean Too Wide.In 1909, Grace McAlister set sail for Canada as one of the thousands of British Home Children taken from their families and their homeland. Though she is fortunate enough to be adopted by wealthy parents, the secrets of her past are kept hidden for ten years until someone from her long-buried childhood arrives on her doorstep. With this new connection to her birth family, will she be brave enough to leave her sheltered life in Toronto and uncover the truth?After enduring hardship as an indentured British Home Child, Garth McAlister left Canada to serve in World War I. His sweetheart, Emma Lafferty, promised to wait for his return, but after three long years apart, her letters suddenly stopped. When Garth arrives home from the war to unexpected news, he is determined to return to Canada once more on a daunting mission to find the two women he refuses to abandon--his long-lost sister and his mysteriously missing sweetheart.

I first met the McAlister family in No Ocean Too Wide, and I was immediately drawn to this family of five children that were torn apart by their mother's illness. Three of the younger McAlister children became British Home Children, and were eventually separated from their siblings. No Journey Too Far is set about ten years later, and once again, readers witness their continued search for each other. 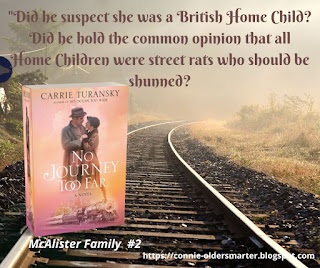 Author Carrie Turansky has created a mesmerizing sequel and she vividly portrays the changes in her wonderful characters over the past few years. I sympathized with Grace's efforts to please her adoptive parents, and her devastating belief that she would be shunned if people learned that she had been a British Home child. She and her older brother Garth each have a chance at love and romance, but will they be able to overcome the many obstacles that await them?

This book had history and mystery to spark my interest, but the faith and strong family ties were what kept me reading. I was once again touched by this family's hope, determination, trust, and faith, and I am thankful to have learned the history behind the British Home Children. Turansky has written a stunning story and I highly recommend No Journey Too Far to all who enjoy historical Christian fiction set during the post World War I era.

I received a complimentary copy of this book from the publisher via NetGalley but I was under no obligation to write a positive review. These are my own thoughts.
My rating: 5 of 5 stars

Check out my review of No Ocean Too Wide..

Carrie Turansky is the award-winning author of more than twenty inspirational novels and novellas and a winner of the ACFW Carol Award, the International Digital Award, and the Holt Medallion. She loved traveling to England to research her latest Edwardian novels including No Ocean Too Wide, Across the Blue, Shine Like the Dawn, and Edwardian Brides series. Her next novel, No Journey Too Far, releases in June 2021. Her novels have received stared reviews from Christianbooks.com and Library Journal. They have been translated into several languages and enjoyed by readers around the world. Carrie loves to connect with reading friends on Facebook, Instagram, Twitter and via her website and blog: carrieturansky.com.
View all my reviews
Posted by Connie Porter Saunders at 2:15 PM