Vibrant historic Yellowstone National Park comes to life in this romantic mystery about a man hiding the truth, braving the west to become something more--and the woman who must confront his deception.

A man who can't read will never amount to anything--or so Nate Webber believes. But he takes a chance to help his family by signing up for the new Civilian Conservation Corps, skirting the truth about certain "requirements." Nate exchanges the harsh Brooklyn streets for the wilds of Yellowstone National Park, curious if the Eden-like wonderland can transform him as well.
Elsie Brookes was proud to grow up as a ranger's daughter, but she longs for a future of her own. After four years serving as a maid in the park's hotels, she still hasn't saved enough money for her college tuition. A second job, teaching a crowd of rowdy men in the CCC camp, might be the answer, but when Elsie discovers Nate's secret, it puts his job as camp foreman in jeopardy. Tutoring leads to friendship and romance, until a string of suspicious fires casts a dark shadow over their relationship. Can they find answers before all of their dreams go up in smoke? 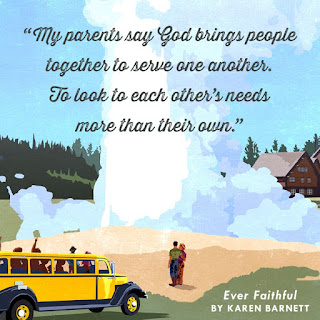 
Ever Faithful by Karen Barnett
My rating: 4 of 5 stars

Elsie Brookes dreams of being a teacher and for the past four years she has worked as a maid during the tourist season at Yellowstone National Park to save money for her college tuition. It is now 1933 and the Depression has affected everything, including the tourist business, and Elsie fears that she may lose her job. If this happens she knows that this will cause another delay in her goal to become a teacher. And then, a group of young men arrive at Yellowstone as a part of President Roosevelt's Civilian Conservation Corps. Along with their chance to work and earn money there is also the opportunity to receive educational instruction.

Elsie is chosen to teach these men and one of them is a young man from Brooklyn, New York. Nate Webber is a hard worker, very capable, and he shows a promising future but he has a secret. As Elsie teaches him and the others, she realizes that Nate can barely read and write so she decides to tutor him on the side. As they become better acquainted, it is plain that Nate is growing fond of Elsie but she resists any relationship because she has her own secret.

Ever Faithful is the story of two people who have each experienced tragedies that have left them scarred emotionally and physically. Elsie's physical scars have caused her to feel unattractive and unappealing; Nate's unfortunate youth and his lack of education make him feel unworthy. It is through their friendship that they learn to see themselves through the other's eyes and they begin to realize their self-worth.

This story is a romance but it has so much more. The history of Yellowstone National Park is sprinkled throughout the story and there is also a strong element of faith. The Golden Rule, grace and forgiveness are stressed and we are reminded that God judges the heart and not outward appearances.

Karen Barnett is a former Park Ranger and her knowledge of the National Park System is apparent in this book and the two previous books of her Vintage National Parks novels. Barnett offers a glimpse of the parks as they once were and encourages us to get out and enjoy these national treasures as they are today.

Ever Faithful is an enjoyable read and I recommend it to anyone who enjoys Christian romance and historical fiction.

I received an Advanced Readers Copy from the author and all opinions in this review are my own.

View all my reviews
Posted by Connie Porter Saunders at 12:44 AM