Bestselling and award-winning author Kathleen Fuller returns to the Amish community of Birch Creek in this charming tale of falling in love while pursuing the dreams of your heart.
Having grown up in poverty, Seth Yoder refuses to be financially insecure again. His passion is woodcarving, but he’s vowed to work on his father’s successful farm, even though his heart is in his craft. Splitting his time between farming and his secret hobby keeps him busy—too busy for social activities.
Martha Detweiler has a different problem—she’s the only single woman in a community full of young men, and they’re all competing for her favor.  All of them . . . except Seth Yoder. Overwhelmed by the unwanted attention, she finds herself constantly fleeing from them, and that isn’t the way she wants to live her life.
When Cevilla Schlabach, Birch Creek’s resident matchmaker, hears of Martha’s predicament, she believes she has the answer—convince Seth to give the impression that he and Martha are dating. Both Martha and Seth think this is a terrible idea, but Cevilla doesn’t let go of something once she gets it in her head. And when Delilah Stoll, a new resident of Birch Creek, eyes Seth as the perfect man for her granddaughter, Nina, Cevilla digs in her heels.
Can Seth and Martha convince their family and friends to leave them alone? Or will their struggles against a community that seems to have decided both their fates bring them closer together? 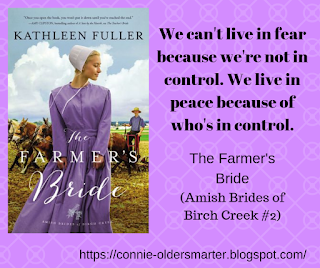 The Farmer's Bride by Kathleen Fuller
My rating: 4 of 5 stars

Some women might enjoy being the only single woman in their community and having several young men pursuing them but Martha Detweiler isn't one of those women. She knows that she needs to be thinking about marriage but this isn't the way she wants to get a husband. Seth Yoder is the only bachelor in Birch Creek who isn't after Martha and he feels no need to claim a wife. At the suggestion of a beloved older member of the Amish community Martha and Seth begin a little deception: they will act like they're seeing each other and then, finally, they will have some peace!

I liked the characters of Martha and Seth and I am especially glad to re-visit Cevilla and Richard , the two older people that we first met in A Chance to Remember, the novella that Kathleen Fuller penned for An Amish Reunion. Cevilla and Richard now admit to being in love but they still face the hurdle of Cevilla being Amish and Richard being an "Englisher".

This is a fun story but it is has serious moments also. Seth yearns to make a living with his wood carvings but he feels obligated to help on his family's farm. Martha also enjoys creating beautiful objects from wood and she and Seth take pleasure in having this is common. Soon, Martha realizes that Cevilla's Plan B isn't as far-fetched as she believed because she is actually beginning to have feelings for Seth. The Farmer's Bride shows that we never know what is waiting around the bend and we should never close our minds (and hearts) to the possibility of love.

You will definitely want to read The Farmer's Bride if you enjoy stories about the Amish way of life and if you believe that romance can occur at any time of life. I truly enjoyed this book.

I received a complimentary copy from the author but a positive review was not required.


View all my reviews
Posted by Connie Porter Saunders at 9:38 PM