My Dearest Dietrich: A Novel of Dietrich Bonhoeffer's Lost Love by Amanda Barratt

A staggering love illuminating the dark corners of a Nazi prison
Renowned German pastor and theologian Dietrich Bonhoeffer is famous for his resistance to the Nazi regime and for his allegiance to God over government. But what few realize is that the last years of his life also held a love story that rivals any romance novel.

Maria von Wedemeyer knows the realities of war. Her beloved father and brother have both been killed on the battlefield. The last thing this spirited young woman needs is to fall for a man under constant surveillance by the Gestapo. How can she give another piece of her heart to a man so likely to share the same final fate? Yet when Dietrich Bonhoeffer, an old family friend, comes to comfort the von Wedemeyers after their losses, she discovers that love isn't always logical.

Dietrich himself has determined to keep his distance from romantic attachments. There is too much work to be done for God, and his involvement in the conspiracy is far too important. But when he encounters a woman whose intelligence and conviction match his own, he's unprepared for how easy it is to give away his heart.

With their deep love comes risk--and neither Dietrich nor Maria is prepared for just how great that risk soon becomes.

Based on detailed historical research and including photos from both Maria's and Dietrich's lives, this is a true love story at once beautiful and heartrending. My Dearest Dietrich sheds new light on a world-famous theologian . . . and the woman who changed his life. 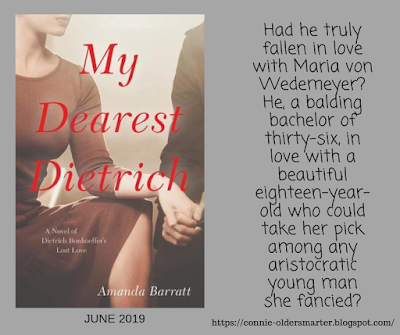 My Dearest Dietrich: A Novel of Dietrich Bonhoeffer's Lost Love by Amanda Barratt
My rating: 5 of 5 stars

When you begin reading this book, please be aware that you will need to pause often so that you can wipe your eyes and if you're like me, you may experience a tightness in your chest during some of the described events. No, it wasn't a heart attack but it was an attack on my heart strings!

I was aware of Dietrich Bonhoeffer and his determination to keep the true gospel message alive during the nightmare of Adolf Hitler's evil regime but I didn't know about the deep love that he shared with Maria von Wedemeyer. My Dearest Dietrich is the account of their relationship that began as a friendship in June 1942, evolved into their engagement in 1943, and continued to his execution in 1945. Yes, this is a novel but Dietrich and his fiancee Maria actually experienced many of the events described in this book. They didn't have a "happily ever after" romance but Dietrich and Maria experienced a deep and beautiful love in those few years. And, as we read in the author's notes, even though Maria married two other men she never loved another man like she loved her 'dearest Dietrich'. There are many touching moments that are beautiful and bittersweet. Maria gets help from prison guards to drag a Christmas tree up three flights of stairs in her effort to provide Dietrich with a special Christmas while he is in prison; Maria gifting him with her late father's watch and telling him "Before I met you, it was owned by the man I loved best. It's only right you should have it now"; and in their last time together, Maria teaching Dietrich to dance.

Many people will say that Bonhoeffer's life didn't have a happy ending either but Christian believers will disagree. The extraordinary life of Dietrich Bonhoeffer certainly wasn't easy but it can never be labeled as wasted. He served His God, he was true to his convictions, and he never doubted where he would spend Eternity. "Whoever I am, Thou knowest, O God, I am Thine."

Author Amanda Barratt devoted several years to researching and writing this book and it certainly shows. This is a book that will most certainly be on TBR (To Be Read) lists everywhere and I will be very surprised if it isn't named to award lists also. My Dearest Dietrich is not a book to be taken lightly and it is a book that you will never forget!

Historical fictions fans---Christian fiction fans---Romantic fiction fans: This book is for you!

I received a copy of this book from the publisher. All opinions are my own.

View all my reviews
Posted by Connie Porter Saunders at 10:53 PM