A Desperate Mother Searches for Her Child
Step into True Colors -- a new series of Historical Stories of Romance and American Crime
Widowed in Memphis during 1932, Cecile Dowd is struggling to provide for her three-year-old daughter. Unwittingly trusting a neighbor puts little Millie Mae into the clutches of Georgia Tann, corrupt Memphis Tennessee Children’s Home Society director suspected of the disappearance of hundreds of children. With the help of a sympathetic lawyer, the search for Millie uncovers a deep level of corruption that threatens their very lives.

How far will a mother go to find out what happened to her child? 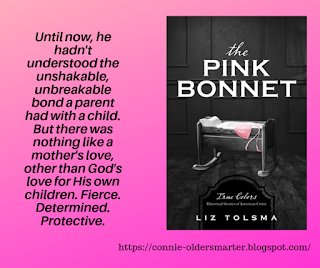 Before reading this book I was vaguely familiar with the story of Georgia Tann and the Tennessee Children's Home Society but I had no concept of the evil that occurred in this agency over the course of 26 years. There were over five thousand children kidnapped during that time for the sole purpose of being sold to the highest bidder. Parents in Memphis had to make sure that their children weren't left alone because of this dangerous woman who wasn't above kidnapping a child as they walked down the street or played in the park. Georgia Tann somehow convinced the public that she was acting in the best interest of the children because of neglect from their natural parents and she and her crooked allies terrorized Memphis and the surrounding area from 1924-1950.

Author Liz Tolsma uses these true facts as the basis for her new novel, The Pink Bonnet. It is the summer of 1933 when widow Cecile Dodd leaves her three year old daughter with a neighbor for a few hours and returns to find her daughter gone. Over the course of the next few months Cecile desperately searches for Millie Mae and it appears that she may never find her little girl again. With the help of lawyer Percy Vance, Cecile follows clue after clue and each time that she thinks she may have found her daughter, another roadblock appears.

The Pink Bonnet is fiction but it is based on the historical facts of this horrendous crime spree and the author really kept me in suspense . There are three different families with little girls who had recently been adopted and I was kept guessing until the very end to see if one of them was actually Millie Mae Dodd.

This story is filled with terror, human suffering, and intense mental anguish but it also shows the fierce determination of a mother desperate to find her little girl. It also reminds us that the deepest childhood hurts can be reconciled by the mercy and peace that comes from knowing a loving Heavenly Father. Percy Vance realizes that 'For the first time in his life, that heavy weight of not belonging, of not having a family, lifted from his chest because he belonged to the family of God.' (p. 239)

I recommend The Pink Bonnet to all who enjoy historical Christian fiction, mysteries and true crime stories but I must advise you that this isn't always an easy book to read!

Posted by Connie Porter Saunders at 12:20 AM