The King's Mercy by Lori Benton

When captured rebel Scotsman Alex MacKinnon is granted the king's mercy--exile to the Colony of North Carolina--he's indentured to Englishman Edmund Carey as a blacksmith. Against his will Alex is drawn into the struggles of Carey's slaves--and those of his stepdaughter, Joanna Carey. A mistress with a servant's heart, Joanna is expected to wed her father's overseer, Phineas Reeves, but finds herself drawn instead to the new blacksmith. As their unlikely relationship deepens, successive tragedies strike the Careys. When blame falls unfairly upon Alex he flees to the distant mountains where he encounters Reverend Pauling, itinerate preacher and friend of the Careys, now a prisoner of the Cherokees. Haunted by his abandoning of Joanna, Alex tries to settle into life with the Cherokees, until circumstances thwart yet another attempt to forge his freedom and he's faced with the choice that's long hounded him: continue down his rebellious path or embrace the faith of a man like Pauling, whose freedom in Christ no man can steal. But the price of such mercy is total surrender, and perhaps Alex's very life. 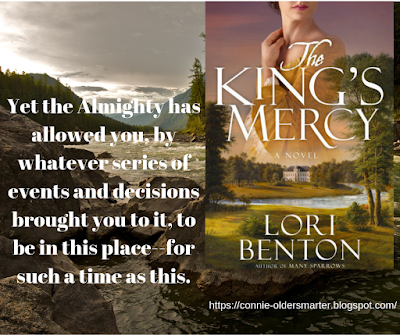 The King's Mercy by Lori Benton
My rating: 5 of 5 stars

The King's Mercy can be labeled an epic historical read for more than one reason--it is 388 pages long and it is a story filled with lots of descriptive detail and numerous historical facts surrounding life in the mid 1700s! From the moment that Scotsman Alex MacKinnon is granted mercy from hanging and handed a seven year sentence to be an indentured servant there is unlimited excitement and drama. Through the author's vivid descriptions I felt like I was traveling with Alex to North Carolina and living with him on the Severn Plantation and I was also there when he escaped to live with the Cherokees for awhile. Alex struggles with his role as an indentured servant and even though he has escaped death Alex certainly doesn't consider the King's mercy as a blessing. As he says goodbye to his dying uncle he comments about mercy. "It's but a word Uncle. There isn't mercy to be granted, by king or God." It is then and there that Alex determined that no God existed who cared enough to grant this thing called mercy.

There is, however, a blessing in Alex's life that soon becomes apparent. He finds a friend in Joanna Carey, the stepdaughter of the plantation owner where Alex is sent and a very special relationship develops. 'She intrigued him, and aroused in him a tenderness he didn't want to feel. Not if he meant to leave this place and never look back.'

Alex and Joanna are both wonderful characters and there are several great supporting characters: Demas, Jemma, Moon and Marigold but there are two characters that stand out because they exemplify the best and the worst natures of humans. Phineas Reeves is the overseer of Joanna's stepfather's estate and his evil is apparent throughout the story but the true extent becomes evident in the latter part of this story. Reverend Pauling is truly an example of the best and he is the perfect witness of someone who may be a slave to circumstances but will always be free because of a relationship with Jesus Christ.

This isn't always a pleasant book to read because of the suggestion of child abuse and the reminder of the ugliness of slavery and discrimination but the author refrains from using inappropriate language or suggestive references. What she does show is Alex's realization that God does care and that he can receive His Grace and mercy. These beautiful themes of love, mercy and forgiveness remind all of us that we too can receive the King's mercy. We all can enjoy freedom from sin and we all can receive mercy and full pardon from our Heavenly Father, the true King.

Lori Benton has written a truly amazing book and I recommend The King's Mercy to all who enjoy historical fiction and strong faith elements.

I received an Advanced Reader Copy as a #Partner of Waterbrook Multonomah and I have chosen to share my honest thoughts in this review.


View all my reviews
Posted by Connie Porter Saunders at 12:38 PM