A corpse that only leads to secrets.
An old flame with danger written all over her.
Things are about to get very complicated.

When one Coast Guard officer is found dead and another goes missing, Coast Guard Investigative Service special agent Finn Walker faces his most dangerous crime yet. His only clues are what little evidence remains aboard the dead officer's boat, and the direction the clues point to will test Finn and the Guard to their limits.
When investigative reporter--and Finn's boss's sister--Gabby Rowley arrives, her unrelenting questions complicate an already volatile situation. Now that she's back, the tug on Finn's heart is strong, but with the risks she's taking for her next big story, he fears she might not live through it.
Thrown together by the heinous crime, Finn and Gabby can't ignore the sparks or judgments flying between them. But will they be able to see past their preconceptions long enough to track down an elusive killer, or will they become his next mark?


The Killing Tide by Dani Pettrey
My rating: 5 of 5 stars 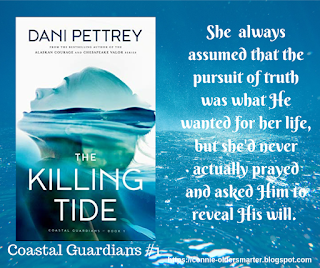 I am a big fan of suspense novels but I am an
even bigger fan of Christian fiction and this novel by Dani Pettrey satisfies my love for both of these genres. The Killing Tide is book one of Pettrey's new Coastal Guardians series and it centers around a team of Coast Guard Investigative agents working the coastal regions of North Carolina and based out of the Wilmington, NC office. This book features several of these agents but the main focus is on Finn Walker and the reporter who captured his heart but then walked away six months ago. Gabby Rowley lives and breathes investigative reporting and she can't see herself doing anything else, even though she is now sidelined because of her involvement in a drug investigation. Through a series of events, she and Finn find themselves thrown together and once again, their hearts and their lives face dangerous risks! 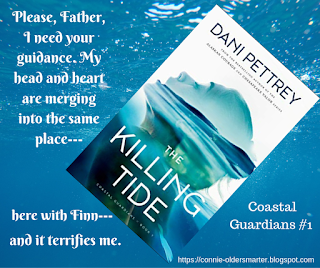 The action in this book begins immediately and it never let up. Just when I thought there couldn't be anything else happen, BOOM, it did! There was a scene that had me wondering just how much more Gabby could endure and I didn't come close to guessing the conclusion. As Finn and Gabby work together to find the killer (or killers), they once again experience their incredible chemistry and Gabby begins to question if her work is really all that she wants. But, along with the intense intrigue and suspense, there is an underlying message of faith. I appreciate the many prayers that Pettrey is able to incorporate into her plot; she subtly shares her Christian beliefs without cramming religon down her reader's throats. 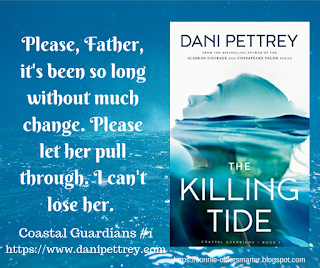 Since it is the beginning of a new series there is apparently lots more adventure to come with these Coastal Guardians. The Killing Tide is also romantic, suspenseful, and thought-provoking. What more could a lover of romantic suspense and Christian fiction ask for?


I received a complimentary copy of this book from Bethany House and I am voluntarily offering this review. The opinions stated here are entirely my own.


View all my reviews
Posted by Connie Porter Saunders at 12:48 PM