Josephine Is Forced to Spy for Grave Robbers
Step into True Colors -- a new series of Historical Stories of Romance and American Crime
In Massachusetts in 1824, Josephine Clayton awakes on the table of the doctor she's assisted all these months. She was presumed dead by all and has become the doctor's next corpse for his medical research. Frightened, the doctor tries to kill her, but Josephine begs to be spared. A deal is struck--Josie will leave her village and work at a distant cotton mill. All the while, she'll await her true mission--posing as a mourner to help his body snatcher procure her replacement. At the mill though, Josie is praised for her medical remedies among the mill girls, gaining attention from the handsome factory manager Braham Terrance. Yet, when Braham's own loved one becomes the prey for the next grave robbing, Josie must make a choice that could put her dark past behind her or steal away the promise of any future at all.
What price will Josie pay for love when her secrets begin to unravel? 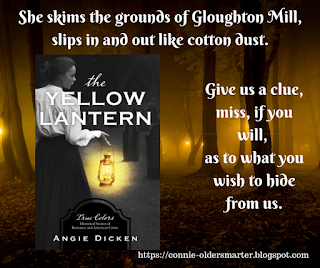 Grave robbers! Body snatchers! Medical research! These are the themes found in The Yellow Lantern and author Angie Dicken has written a story that I found both intriguing and disturbing. I had heard of robbing graves to steal jewels and other objects off of dead bodies but I wasn't as familiar with these corpses being removed to be used for medical research. The opening scene describes a young girl, presumed dead and already buried, who awakens to find herself staring up at a doctor with a knife. Yes, she was believed to be a corpse but now, she will need to be killed so that her body can be sold by a body-snatching ring that is operating in her Massachusetts village. In exchange for her safety and to help her father, Josephine Clayton reluctantly agrees to become a part of "The Network" and help obtain bodies to satisfy the demands of those who steal and then sell these corpses. As Josie becomes more involved, she realizes that she must try to discover who these "Resurrectionists" are and to stop this evil practice that is clearly against all of her Christian beliefs. 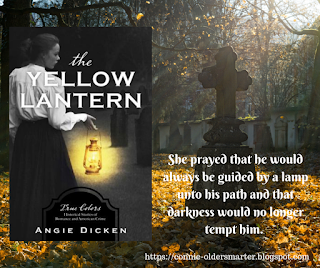 The Yellow Lantern is based on true facts and it is apparent that Dicken extensively researched this practice that occurred in the nineteenth century. She describes how these bodies were stolen and how women were often hired as "mourners" so that they could be look-outs as the graves were being robbed. Her story has mysterious deaths, unexplained accidents, and Josie's ability to heal with herbs. There is also a romantic interest between Josie and Braham Taylor, her boss at the local cotton mill, but most of The Yellow Lantern centers around the rush to discover who is responsible before more innocent people become victims. There is definitely a surprise when the identities of these truly evil people are uncovered and there is also the redemption of one character who was very unlikeable throughout much of this book.

If you enjoy historical fiction and Christian suspense, you will want to read The Yellow Lantern, the third book in the True Colors series. 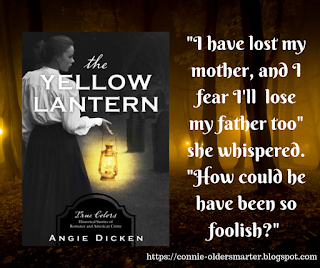 More from the True Colors Series

View all my reviews
Posted by Connie Porter Saunders at 4:39 PM