Welcome to the Blog Tour for Fragments of Fear by Carrie Stuart Parks, hosted by JustRead Publicity Tours 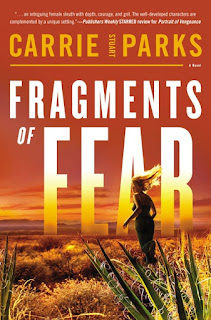 Stolen art. A New Mexico archaeological dig. An abandoned dog. And a secret that’s worth killing for.

Evelyn McTavish’s world came crashing down with the suicide of her fiancé. As she struggles to put her life back together and make a living from her art, she receives a call that her dog is about to be destroyed at the pound. Except she doesn’t own a dog. The shelter is adamant that the microchip embedded in the canine with her name and address makes it hers. Evelyn recognizes the dog as one owned by archaeologist John Coyote because she was commissioned to draw the two of them. The simple solution is to return the dog to his owner—but she arrives only to discover John’s murdered body. As Evelyn herself becomes a target, she crosses paths with undercover FBI agent Sawyer Price. The more he gets to know her, the more personally invested he becomes in keeping her safe. Together, they’re desperate to find the links between so many disparate pieces.

And the clock is ticking.

“Over the years, Carrie has mastered forensic art, fine art, and her own brand of offbeat humor. As a novelist she combines these skills with another: puzzle writing––scattering puzzle pieces all over her fictional universe and then dropping them into place in twists, surprises, revelations, and side-pocket whimsy until the big picture emerges, never too soon, always on the brink of disaster.” —Frank Peretti (less)

Evelyn McTavish is an accomplished but struggling artist and she seems to have a hard time realizing her self-worth. "Tavish" has apparently had a weight problem in the past  so she has a poor self-image of herself, her relationship with her mother is very strained, and she has just buried her fiance when this book begins. Suddenly, she finds herself caretaker to a dog whose owner has been murdered and running from the person who probably killed him.  As the  story continues, Tavish and FBI Special Agent Sawyer Price work together to find answers as more murders are committed, art work is stolen, and art forgeries are discovered. Along the way, Tavish has her car stolen, she becomes a walking target, and she finds her sanity being questioned. Who is behind this and why is she the target? Sawyer seems to want to protect her but are his motives honest and pure? Perhaps the only positive outcome from all of her problems is that Evelyn Yvonne McTavish  finally begins a relationship with the Heavenly Father that her late beloved grandmother had encouraged her to find.

I must admit that I don't often read stories set in New Mexico so I enjoyed the references to Albuquerque and the use of Native American artifacts in the plot. I also enjoyed the unending suspense and trying to guess just what was coming next.  Fragments of Fear is filled with non-stop action and danger and I can see why other readers are so eager to read Parks's books. This was my first time to read a book by Carrie Stuart Parks but it won't be my last!

I voluntarily received an Advance Reader's Copy from Thomas Nelson as part of JustRead Publicity Tours but I was not required to write a positive review. 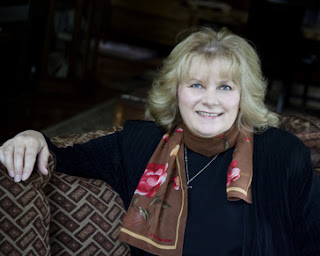 Carrie Stuart Parks is a Christy finalist as well as a Carol Award-winning author. She has won numerous awards for her fine art as well. An internationally known forensic artist, she travels with her husband, Rick, across the US and Canada teaching courses in forensic art to law-enforcement professionals. The author/illustrator of numerous books on drawing and painting, Carrie continues to create dramatic watercolors from ther studio in the moutains of Idaho.

Posted by Connie Porter Saunders at 12:01 AM