The Rebel Bride (Daughters of the Mayflower #10) by Shannon McNear

Can Love Form Amidst Tensions of War?
​
During the clash between Union and Confederacy, quiet Tennessean Pearl MacFarlane is compelled to nurse both Rebel and Yankee wounded who seek refuge at her family’s farm. She is determined to remain unmoved by the Yankee cause—until she faces the silent struggle of Union soldier Joshua Wheeler, a recent amputee. The MacFarlane family fits no stereotype Joshua believed in; still he is desperate to regain his footing—as a soldier, as a man, as a Christian—in the aftermath of his debilitating injury. He will use his time behind enemy lines to gather useful intelligence for the Union—if the courageous Rebel woman will stay out of the line of danger. 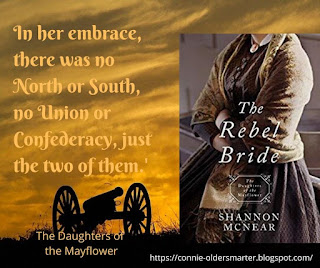 I am a fan of the Civil War era so I was excited to learn that author Shannon McNear had taken a different approach in The Rebel Bride. It isn't set on a Southern plantation; instead, the action centers around a middle-class family on their farm in Tennessee. Pearl MacFarlane and her family find themselves with both Union and Confederate soldiers needing care after being wounded in a battle in nearby Georgia. Pearl becomes worn out physically and drained emotionally as she tries to help these men but she becomes especially involved with a soldier whose hand and lower arm had to be amputated. As she tends his wound, a friendship develops between them but their relationship faces many trials. Josh Wheeler is determined to help the Union cause and Pearl's loyalties lie with the South. Is there any way that they could ever find a middle ground? 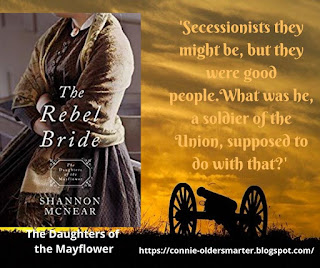 This is wonderful historical fiction and McNear's descriptive powers placed me right there. I heard the guns being shot, followed by the screams of the wounded soldiers; I felt the cold and the fear; I smelled the blood and chloroform. The Rebel Bride is also Christian fiction and prayer and Bible scripture are often used to show how Pearl and Josh seek help and guidance as they struggle with their different beliefs.

In the historical notes the author mentions her extensive research and it is evident because this story is so very rich in historical detail. Fans of Christian fiction and historical romance will certainly want to read The Rebel Bride.

After more than two decades in the South, Shannon McNear now makes her home on the windy northern plains with her husband, four of their eight children, two German Shepherds, a bunny, three cats, several chickens, and a noisy flock of guinea fowl. She serves in worship and youth ministry, and has been writing novel-length fiction since age 15. Her first novella, Defending Truth, from A Pioneer Christmas Collection, was a 2014 RITA® nominee.

When not sewing, researching, or leaking story from her fingertips, she enjoys being outdoors, basking in the beauty of the Dakota prairies.

The Daughters of the Mayflower Series

View all my reviews
Posted by Connie Porter Saunders at 11:54 PM