COVER REVEAL! A Portrait of Loyalty by Roseanna White

Today is the Day! 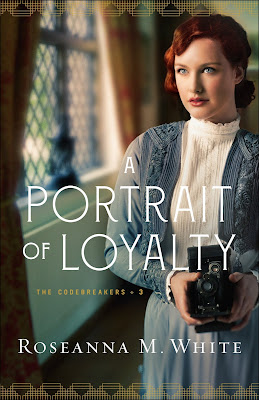 Zivon Marin was one of Russia’s top cryptographers, until the October Revolution tore apart his world. Forced to flee after speaking out against Lenin and separated from his brother along the way, he arrives in England driven by a growing anger and determined to offer his services to the Brits.

Lily Blackwell sees the world best through the lens of a camera—and possesses unsurpassed skill when it comes to retouching and recreating photographs. With her father’s connections in propaganda, she’s recruited to the intelligence division, even though her mother would disapprove.

After Captain Blackwell invites Zivon to dinner one evening, a friendship blooms between him and Lily. He sees patterns in what she deems chaos; she sees beauty in a world he thought destroyed. But both have secrets they’re unwilling to share, and no one is quite certain where Zivon's loyalties really lie—until his enemies are discovered to be far closer than he’d feared, and only Lily's skills can save him.

Roseanna M. White is a bestselling, Christy Award nominated author who has long claimed that words are the air she breathes. When not writing fiction, she’s homeschooling her two kids, editing, designing book covers, and pretending her house will clean itself. Roseanna is the author of a slew of historical novels that span several continents and thousands of years. Spies and war and mayhem always seem to find their way into her books…to offset her real life, which is blessedly ordinary. She and her family make their home in the beautiful mountains of West Virginia. You can learn more about her and her stories at www.RoseannaMWhite.com.