From Sky to Sky by Amanda G. Stevens: Review & Giveaway 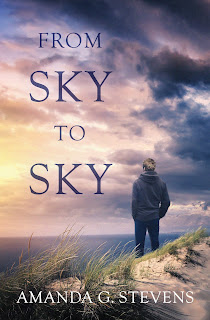 Daredevil Zac Wilson isn’t the first celebrity to keep a secret from the world, but his might be the most marvelous in history: Zac doesn’t age and injuries can’t kill him. What’s more, he’s part of a close-knit group of others just like him.

Holed up in Harbor Vale, Michigan, Zac meets two more of his kind who claim others in their circle have died. Are their lifetimes finally ending naturally, or is someone targeting them—a predator who knows what they are?

The answers Zac unearths present impossible dilemmas: whom to protect, how to seek justice, how to bring peace to turmoil. His next action could fracture forever the family he longs to unite. Now might be the time to ask for help. . .from God Himself. But Zac’s greatest fear is facing the God he has run from for more than a century.

From Sky to Sky is a fascinating mix of fantasy and Christian fiction and once again, I find myself feeling sorry for those who live far beyond their years and have seen their own children and grandchildren die before them. When you live a long time you are bound to experience a lot of joy and happiness but also a lot of pain and grief. Just imagine how these emotions would be multiplied if you were to live 165 years? What if you were born in 1855, stopped aging in 1887, and were still alive in the year 2020? Can you begin to contemplate what you would have seen and felt? This is the story of such a man.

Yes, Zac Wilson is a longevite, a person who cannot die, and author Amanda G. Stevens explores his life and the lives of others like him. She first introduced us to longevites in No Less Days and I was fascinated with David Galloway and his feelings of isolation until he discovered that he wasn't alone. There were others who couldn't die and one of them was Zac Wilson. Now, in From Sky to Sky, we learn more about Zac, his relationship with another longevite Moira, and his efforts to resist God. Until, he realizes that "Father, I can't keep carrying all of their pain. Please take it." (p. 262). And, in a deeply touching scene, he begins to read a Bible and remembers that "He hadn't touched God's Word in 100 years."

This is a book that will make you think and prompt you to question 'What if?', but also remind you of God's ultimate plan and His promise of grace, redemption, and eternal life, after our physical lives are over. Amanda G. Stevens has written another great Christian speculative book and I highly recommend it.

I received a copy of this book from the author and Celebrate Lit. A positive review was not required and these are my own thoughts. 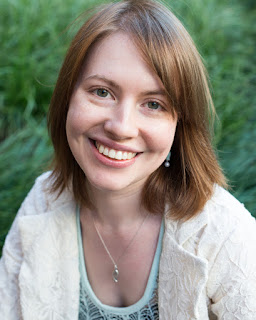 As a child, Amanda G. Stevens disparaged Mary Poppins and Stuart Little because they could never happen. Now she writes speculative fiction. She is the author of the Haven Seekers series, and her debut Seek and Hide was a 2015 INSPY Award finalist. She lives in Michigan and loves trade paperbacks, folk music, the Golden Era of Hollywood, and white cheddar popcorn.


For years, the theme of immortality has intrigued me. I love the Elves of Middle-Earth, the “happiest and saddest” of the peoples Tolkien created as they watch the ages pass. I love the exploration of aged sorrow in Tuck Everlasting. I’ve stuck with TV shows which shall remain nameless (but, ahem, a few feature vampires) because I’m always wondering how did this writer tackle immortality? Anything new? Are the characters convincingly old and young at the same time?

The thing is, while some of these fiction works satisfy me more than others, I’m always left with a tug of incompletion. Eventually I figured out this tug was a story in my own head and heart wanting to come out, a contemporary story that included the gospel. What might God’s plan be for those whose earthly days seem unnumbered? How would their age affect their interactions with humanity and with faith? These questions were the springboard for the No Less Days series, and of course the answers vary with the individual. Ultimately this is why I write: to explore people, their inner selves, their relationships. My goal is always to create characters that breathe from the page.

In From Sky to Sky, we get a look into the head and heart of Zac Wilson, who has been on the run from God longer than any of us could imagine: a full century playing the prodigal. I always try to be honest about how much life can hurt, “even” for the Christian; if we had triple the number of years to accumulate hurt in this broken world, we’d have a lot of it. That’s true of all my ageless characters, including Zac. To scratch the surface, this man fought in two world wars and has outlived all his children.

But the sum of Zac is much more than his collected wounds. He is a deep-feeling, fun-loving, generous guy. He enjoys music and physical activity. He has an insatiable sweet tooth and a need for open spaces. He’s not afraid to laugh at his own expense, and he has a boundless love for people and the stories of their lives.

My hope is that readers will grow to love this young old guy as they journey with him through some dark times toward redemption and light. 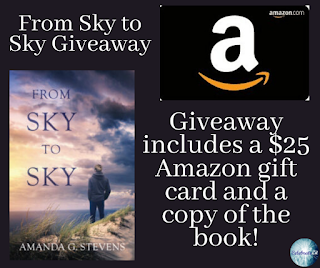 To celebrate her tour, Amanda is giving away the grand prize package of a a $25 Amazon gift card and a free copy of From Sky to Sky!!


View all my reviews
Posted by Connie Porter Saunders at 9:30 AM