The Blizzard Bride (Daughters of the Mayflower, #11) by Susanne Dietze

A Blizzard Changes Everything
Abigail Bracey arrives in Nebraska in January 1888 to teach school…and to execute a task for the government: to identify a student as the hidden son of a murderous counterfeiter—the man who killed her father.
Agent Dashiell Lassiter doesn’t want his childhood sweetheart Abby on this dangerous job, especially when he learns the counterfeiter is now searching for his son, too, and he’ll destroy anyone in his way. Now Dash must follow Abby to Nebraska to protect her…if she’ll let him within two feet of her. She’s still angry he didn’t fight to marry her six years ago, and he never told her the real reason he left her.
All Dash wants is to protect Abby, but when a horrifying blizzard sweeps over them, can Abby and Dash set aside the pain from their pasts and work together to catch a counterfeiter and protect his son—if they survive the storm?

When Abigail Bracey and Dash Lassiter ended up in the same small town in Nebraska, they were more than two people working undercover to try to find a dangerous counterfeiter who was also a murderer. Dash had been Abby's childhood sweetheart and she was deeply hurt when he left town. She also carried the grief of her father being murdered and that traumatic event had left her a bitter young woman. As Abby tackles her teaching job she realizes that it may be just the antidote that she has needed because she has become very fond of her students and, faced with the immense danger from the unexpected Blizzard of 1888, she bravely risks her life to guide them to safety. Abby also begins to experience familiar emotions as she and Dash work together and she understands that it is time that she put the past behind her. She recognizes her need to forgive but can she truly forget all that has happened? 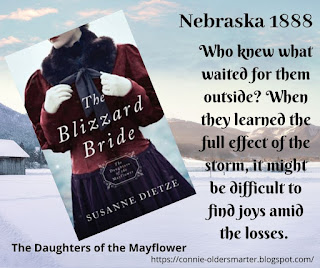 I was familiar with the Blizzard of 1888 that claimed the lives of so many children in Nebraska and across the Great Plains so I was very excited to learn that Susanne Dietze was using it in The Blizzard Bride. I was anxious to read it and I'm so very glad that I did! This book has everything that I love--true historical events woven into a fictional story; realistic characters that portray the worst and the best of humans; a mystery that had me guessing until the end; a beautiful faith message that reminded me of the need to forgive as I have been forgiven; and a romance that I won't soon forget! This is the eleventh book in The Daughters of the Mayflower series and I highly recommend it to all who enjoy historical fiction and Christian romance.

I received a copy of this book from the author but there was no obligation for a positive review. These are my honest thoughts. 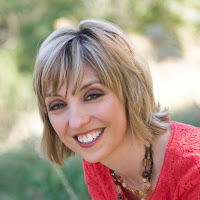 Susanne Dietze began writing love stories in high school, casting her friends in the starring roles. Today, she's the award-winning, RITA®-nominated author of several romances who's seen her work on the Publisher's Weekly, ECPA, and Amazon Bestseller Lists for Inspirational Fiction. Married to a pastor and the mom of two, Susanne lives in California and loves fancy-schmancy tea parties, the beach, and curling up on the couch with a costume drama and a plate of nachos.

View all my reviews
Posted by Connie Porter Saunders at 11:46 PM